Passageways to the past Whenever I cross a covered bridge, I think how different they are from the towering steel monstrosities used today. Then my thoughts dwell on the people on horseback and wagons who passed that way many years ago. 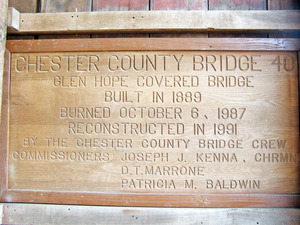 Thomas F. Gordon’s “Gazetteer of the State of Pennsylvania” calls our commonwealth “the state of bridges," Pennsylvania being “unrivaled in number, magnitude and boldness of design…” In his book “Covered Bridges of Chester County, Pennsylvania,” Arthur E. James states that our local heritage includes one bridge built across the western branch of Brandywine Creek when Thomas Jefferson was President in 1807.

By the 1830s, Pennsylvania had more of these charming structures than any other state. Over the next 90 years, 77 covered bridges were built locally, in addition to 21 others which crossed over to neighboring Delaware, Lancaster and Montgomery counties. At the end of the 19th century, 85 were still in active use.

There’s even a group devoted to following these lovely reminders of a bygone era. The 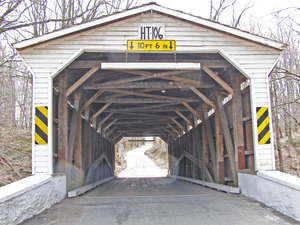 Theodore Burr Covered Bridge Society of Pennsylvania maintains an updated listing of all those which remain. Chester County still has at least 15 still standing.

The Valley Forge/Knox Bridge was built in 1851 by Ferdinand Wood across Valley Creek, near present-day Valley Forge Park. It was later destroyed by fire and replaced in 1865. It is sometimes called the Knox Bridge, after two well-known men with that name. General Henry Knox was George Washington’s chief of artillery during the Revolutionary War. He had his quarters in one of the homes along the creek, near where the bridge was later built. Philander C. Knox served two terms as U.S. Senator, U.S. Attorney General and later as Secretary of State under President Taft. After he purchased land and a home in close proximity to the bridge, some people started calling it the Knox Bridge. Later, the bridge was nearly destroyed by fire, but due to the quick action of the Valley Forge Park police, it was saved and reinforced with steel girders. 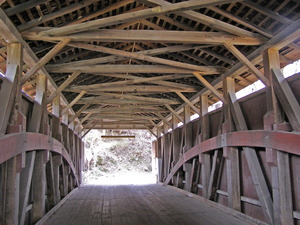 Bartram’s Bridge, over Crum Creek, is an inter-county structure with a 60-foot span and a 13-foot-wide roadway built in 1860. Connecting Willistown Township in Chester County to with Newtown Township in Delaware County, it was first described as “high and wide as a load of hay.” Although closed to traffic, it has been preserved and well maintained over the years.

Gibson’s Harmony Bridge, over the Brandywine near Downingtown, was built in 1872, gaining its name from local farmer James Gibson and the local village of Harmony Hill. This bridge is one of the remaining structures that span the Brandywine. The original marble stone marker is still there on the southeastern wall.

Mercer’s Bridge, over the Octorara Creek, is just under a mile south of Atglen. Prior to its construction, there was a log for foot traffic chained to an iron post deeply buried in the ground so that floodwaters wouldn’t carry it away. The name comes from John Mercer, a local farmer who erected a flour mill prior to the Civil War. The commissioners of Chester and Lancaster counties awarded a contract for bridge construction, allowing an expenditure of $1,652 for the 85-foot span. The bridge was considered so picturesque that the Chester County Tourist Board presented a photograph of the structure to U.S. Rep. Paul Dague of Downingtown, who kept it on the wall of his office for 20 years. 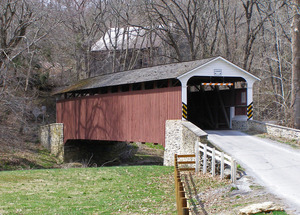 roughly a mile and half upstream from the Mary Ann Pyle Bridge, built at the same time in 1881. Speakman’s was named after Jonathan Speakman, who converted a pre-Civil War paper mill into a gristmill. With a 75-foot span and a 14-foot width, it was a well-traveled bridge for many years, despite it being damaged by fire.

The Linton Stevens Bridge stands near the intersection of East Nottingham, Elk and New London townships. A popular thoroughfare running from New London Village to the Hickory Hill Post Office was partly responsible for its name, as Linton Stevens was the local postmaster who kept shop in his general store.

The Glen Hope Bridge, near Oxford in Elk Township, was built when Grover Cleveland was completing his first term in Washington. The total cost of $1,767 was divided between Menander Wood, who earned $994 for the woodwork, and George E. Jones, who was compensated $773 for the stonework. Jones came to Oxford after the Civil War and did much of the stonework on many other Chester County bridges. 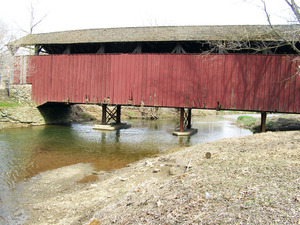 The bridge with a posted three-ton limit was later damaged when the driver of a 20-ton cement truck tried to cross it, literally falling through the bottom and sinking into the stream below. The bridge was saved when Chester County Commissioner J. Carl Empie allocated funds for its repair.

Although less often used, these old friends survive despite decades of wind, rain and snow, and still offer travelers their sturdy beams for transport. If you haven’t driven or walked across an old covered bridge, enjoy a tour through the countryside where one stands. Take a long look. You’ll see a proud symbol of our heritage which continues to offer its services.

Gene Pisasale is an author/lecturer based in Kennett Square. His books and lecture series focus on historical topics. His latest book is “The Forgotten Star,” which delves into true-life mysteries surrounding the War of 1812 and an American icon -- The Star-Spangled Banner. His lecture series on this topic is being presented around the region to celebrate the 200th anniversary of this historic event. He can be contacted at Gene@GenePisasale.com. His website is www.GenePisasale.com.