Jessica Hauber of the engineering firm of Remington, Vernick & Beach presented five options for the refurbishing of the Chandler Mill Road Bridge.

During a marathon-length meeting that lasted four hours and gave a forum to more than two dozen experts, local leaders and concerned residents, the fate of the historic Chandler Mill Road Bridge inched one step closer to finalization last Wednesday evening, with the unveiling of potential plans for its future. 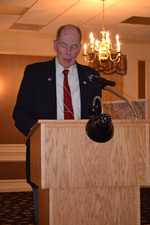 The bridge, built in 1910 and listed on the National Register of Historic Places, was closed to traffic on May 6, 2011 due to extensive structural damage. Now functionally obsolete, it is currently owned by Chester County, which has said it plans to rebuild the bridge as a two-lane, two-way structure. The county has also maintained that should Kennett Township want to “own” the bridge, that the township would be responsible for the entirety of its design, construction and maintenance.

All five options would only be applicable if the township chooses to take over the ownership of the bridge. Should the township choose not to own the bridge, the county will construct a new, two-lane, two-way bridge, a construction process that Kennett Township Supervisors chairman Scudder Stevens said may take five years to complete.

Since its closing, the bridge has become a lightning rod of controversy in the township, and there was clear evidence at the meeting that both sides of the issue were present to state their opinions. Some support the idea of reopening of the bridge as a two-lane, two-way structure in order to open up a vital thoroughfare in the  township, while others claim that rebuilding the bridge as a pedestrian and bicycle bridge only would enable the creation of a park-like setting within the Red Clay Greenway Trail.

The meeting, held at the Red Clay Room in Kennett Square and moderated by Stevens, was highlighted by the results of a feasibility study by the engineering firm of Remington, Vernick & Beach, the township's engineering firm. Asked by the township to provide concepts for the potential rehabilitation of the bridge – that both meet current bridge standards, retain the historic integrity of the bridge and ensure the safety of the public –  the firm came up with five potential options that were presented by Jessica Hauber, a design engineer with the firm.

The firm's first option would be to completely reconstruct the bridge as a one-lane vehicle structure, converting Chandler Mill Road to a one-lane road and replacing the bridge with a single-span, multi-girder, simply supported steel superstructure bridge, with concrete wing walls and abutments. In addition, bike/pedestrian lanes would be constructed on both sides of the road and the bridge to accommodate the increasing number of bike riders and walkers, who have, since the bridge's closing, used the bridge for that purpose. The cost of the option would be $1.6 million.

The second option would be to fully replace the bridge as a 28-foot-wide, two-lane, two-way structure, one that would accommodate vehicles, bicyclists and pedestrians as well, through the construction of bike lanes. The estimated cost of  this option would be $1.81 million.

A third option would be to reopen the bridge as a pedestrian- and bicycle-only structure. That would cost the township $570,000.

Hauber introduced a fourth option, one that would reconstruct the bridge as a Y-shaped, combination two-lane, two-vehicle and pedestrian/bike bridge that would involve re-aligning Chandler Mill Road slightly east to accommodate vehicle traffic over a newly-constructed bridge, while at the same time redeveloping the current bridge to serve as a pedestrian/bike-only structure. The estimated construction cost for this option would be $2.51 million.

Finally, Hauber introduced a fifth option that would provide rehabilitation for the bridge, with no accommodation for pedestrian and bike traffic. The cost of this option would be $750,000.

Stevens then asked Hauber about how much load-bearing weight these options could withstand. Hauber replied that the proposed options that call for two-lane vehicle traffic would meet standard weight-bearing requirements.

Steve Melton, fire chief for the Kennett Fire Company, gave the audience the response time to the Chandler Mill Road Bridge. He said that depending on the road route, the driving time between the fire station and the bridge ranged from six-and-a-half minutes to a little more than eight minutes.

“Time is of the essence for us,” he said. “For us to get to a person having a coronary, we need to get to them within the first five to six minutes."

Melton said that in the event of a fire emergency, the department would use water from the Red Clay Creek. He said that his biggest concern is in the event of several neighboring fire companies responding to EMS and fire calls -- namely, the fire companies in Hockessin and in Avondale. He also shared a concern of weight limitation on the bridge to accommodate a fire vehicle, which Melton said includes a 30-ton multi-purpose fire truck.

Stevens and his fellow board members Dr. Richard Leff and Robert Hammaker monitored an open forum of comments and presentations. Over the next three hours, more than one dozen township residents voiced a wide spectrum of opinions, ranging from their vehemently opposing the development of the bridge for vehicles, to supporting the idea of refurbishing the bridge to its original purpose -- as a bridge used for vehicle transportation. Stevens read letters from several other township residents, each of whom expressed different opinions on the issue.

Gwen Lacy of the The Land Conservancy for Southern Chester County, representing the Chandler Mill Bridge Consortium, said there are only two viable rehabilitation choices for the bridge; either to develop it as a pedestrian and bicycle bridge, or rehabilitate the bridge as a one-lane vehicular structure. She said by choosing either option, values of homes in the area would increase, traffic would decrease, preserving a rural feel to the township, the bridge would serve as a connective link to the Red Clay Greenway Trail, and help preserve a sense of history.

"The Chandler Mill Road Bridge is the keystone to this area," Lacy said. "This bridge is part of the story of our time. Let's take back our roads, to think of generations down the line."

Lacy then introduced Sidney New, PennDOT's project manager for the Chandler Mill Bridge, who informed the supervisors and the audience that if the township takes over the ownership of the bridge and chooses to change the purpose of the project from a structure for vehicles to a pedestrian- and bike-only bridge, that federal funding would be available to help pay for the conversion of the bridge to become a pedestrian- and bike-only structure.

"If the bridge is converted to be pedestrian only, that bridge comes off the federal and state highways system, which means that any future maintenance or repairs to the bridge would not be eligible for federal or PennDOT funding," New said.

Speaking on behalf of the county, Sandy Martin of McCormick Taylor said that the county has just completed a feasibility study and is ready to enter into preliminary design  to convert the bridge to a two-lane, two-way vehicle structure.

"Depending on what kind of resistance or interaction is met with the public, there is probably two to three years of design to finish the project," Martin said. "The county has gone through a lot of studies to get to where it is today. From the county's perspective, we've vetted out a lot of alternatives to this project."

Martin said that the county still has the offer on the table to Kennett Township, should the township wish to take ownership of the bridge.

After giving more residents an opportunity to voice their opinions, the supervisors each gave closing statements. Hammaker opposed the idea of the township taking ownership of the bridge.

"The county is on track to build a bridge at no cost to the township," he said. "In my opinion, the historic designation is spurious. I don't think the Kennett Township taxpayers want to take over the bridge and take to building it, maintaining it, and replacing it due to age or disaster, and assume the liability for it, forever."

"We'd be irresponsible to build a bridge above and beyond what we need," Leff said. "What I haven't heard tonight is whether any bridge would be able to weather a ten-year storm. I have serious issue with whatever goes in as responsible use of funds, whatever the source is."

Stevens said that he believes that a decision on whether the board chooses to take over the ownership of the Chandler Mill Bridge should be reached at the next board of supervisors meeting, scheduled for May 21.

"We've heard a lot from both sides, and we learned tonight that there are at least five possibilities to resolve the bridge issue," Stevens said. "We've been talking about this for as long as I've been on the board, and in the meantime, the county continues to expend money. They've told us that they would work with us if we choose to take the property back, but are continuing to go forward on engineering services. The community has made it very clear that we need to make a decision on this."