Anna Steinmetz hit a two-run home run in the top of the second inning to propel West Chester Rustin to a 4-2 win over Avon Grove on Monday, defeating a team that was in first place as the day began. 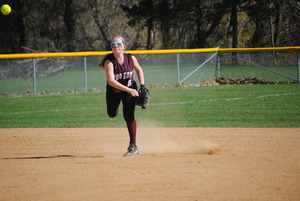 Garguilo. Charlotte Elrod drove in the first run with a double. Steinmetz then followed with the home run.

Rustin starting pitcher Caela Abadic made those three runs stand up with seven innings of work in which she scattered just three hits. In her first time through the lineup, she surrendered just one single and a walk.

Maggie Balint, Avon Grove’s standout pitcher, took over with two outs in the second inning and kept the score at 3-0. She struck out two hitters in the third and three more in the fourth, giving Avon Grove a chance to rally. 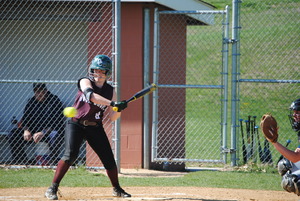 The team's first offensive spark came in the bottom of the fourth as Alyssa Herion led off the inning with a single up the middle. Balint followed with another single. Madison Porter stepped to the plate and hit a grounder to second base, moving the runners to second and third. Abadic fanned Allie Volko for the second out. Next up for Avon Grove was Logan Needham. When a pitch by Abadic skipped past the catcher, Herion raced home to score her team’s first run. Balint moved to third on the same play. Needham eventually walked, putting runners at the corners for Taylor Volko. Needham promptly attempted to steal second base, and when the throw went down, Balint broke for home. Volko was safe and Balint crossed the plate, making it 3-2. Abadic retired the next hitter, Morgan Vansciver, on a grounder to third.

Rustin got one of those runs back in the top of the fifth, following the same formula that Avon Grove used to manufacture a run. Brittany Fichter drew a one-out walk. She moved to second on a wild pitch, and then advanced to third on a sacrifice bunt by Lindsay Mitchell. Fichter then scored on a wild pitch, making it 4-2.

Abadic went back to work on the mound, striking out two Avon Grove hitters in the fifth. She 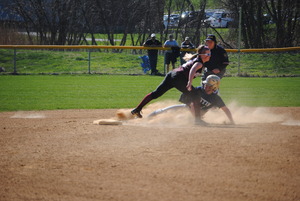 fanned nine hitters during the game and also made a couple of nice defensive plays that prevented Avon Grove from picking up base hits. Avon Grove could muster just two walks in the last three innings, and Abadic finished the game strong, striking out the last two hitters.

Avon Grove coach Julie Hatfield said after the game that her team can’t afford to take any games off in the highly competitive Ches-Mont League.

“Every team is going to be gunning for us,” she said, referring to Avon Grove’s status as a first-place team. “We came out of the shoot a little slow in this game. And I think we just got in our own way today.”

Avon Grove, now 7-2 on the season, could take away some positives. For instance, the team did battle back after falling behind 3-0. 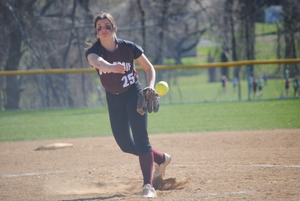 “We work a lot on how we respond to situations,” Hatfield said. “Do we hang our heads or do we step up?”

In Balint and Herion, Avon Grove has two dependable players in key positions.

“Alyssa is pretty solid behind the plate,” Herion said. “And {Maggie} is dependable—you know exactly what you’re going to get.”

Balint and Herion play together on a travel team and work well together, Hatfield said.

While Balint, a sophomore, and Herion, a junior, may be leaders on the team, Hatfield 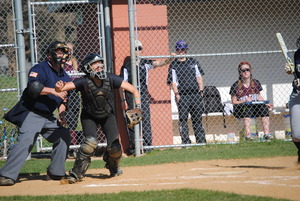 emphasized that the strong start that finds Avon Grove atop the standings can be attributed to a team effort. Avon Grove is still a very young team, and Hatfield is eager to see how the squad performs down the stretch when each game grows more important as the playoff picture becomes clearer.

“The girls want it,” Hatfield said. “They really do.”