It is a bright spring morning in Kennett Square, and State Street is brimming with its usual activity. The doors of businesses are open, allowing the crisp air to enter store after store, and the flower pots along the sidewalks show the colorful promise of the season.

Matt Genereux and Nadiene Ringler-Friedrich sit side by side at the Philter, but neither is much interested in cappuccino, espresso or coffee that owner Chris Thompson and his staff are offering behind the counter. It is a little more than one month away from May 17, the day of the 25th annual Kennett Run, and for both Genereux and Ringler-Friedrich, the key organizers of the annual event, their days are dictated by a massive punch-list of people to contact, events to arrange, and meetings to attend.

The volunteer list of the Kennett Run includes hundreds of people, and chances are good that Genereux and Ringler-Friedrich will, by the race's start, have reached out to nearly all of them.

Both will admit that as race day nears, their work -- and the work of many volunteers -- becomes nearly an around-the-clock commitment, but one that will be felt in the Kennett Square community throughout the year. 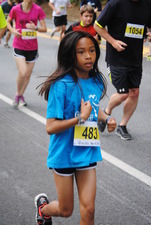 "We prepare for both the anticipated and non-anticipated growth of this event from year to year, all in an effort to make this seamless for the public and participants," said Genereux, who is the president of Kennett Run Charities, Inc. "It takes the coordination of our EMS team, our local authorities, our volunteers and our police departments to make everything run smoothly. Our goal is to want everyone to walk away at noon saying that the run was a good experience, that it was safe, that it was well organized, and that most importantly, it was for charity."

Since its beginning a quarter of a century ago, when a little more than 100 runners participated, to this year's race, where over 3,000 are expected to enter, the Kennett Run has raised more than $500,000 for dozens of community organizations and individuals throughout Chester County.

Ringler-Friedrich and Genereux give tremendous credit to the run's founders and early directors for building its foundation, which they said has enabled the Kennett Run's popularity to explode in the last eight years, due to a combination of the involvement of the Kennett YMCA Girls on the Run program, a broadened marketing approach and re-branding, and increased corporate sponsorships.

"Through the growth, we can really begin to showcase who benefits from Kennett Charities throughout the year," Genereux said. "Through everyone's commitment, we're better able to share our mission, to dedicate the resources here, right in southern Chester County, and not only to organizations but to individuals and families."

With each passing year, the Kennett Run is tinkered with, tweaked and expanded, and 2014 is 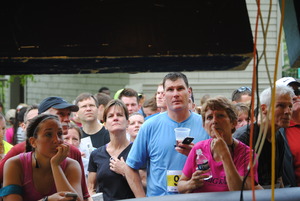 no exception. The annual PoweRun competition, open to men and women 14 and older and coordinated with the Kennett YMCA, is being dedicated in memory of Joe Hector, a long-time YMCA employee who passed away last year.

"The 'Y' is a huge part of our borough and the Kennett community, and Joe had spearheaded the PoweRun for years," said Ringler-Friedrich, who is in her third year as race director. "As we began to reach out into the community, wanting to grow the race locally, we thought about the ways we could make an impact. By dedicating the PoweRun to Joe, we bring in Joe's 'Y' family, his own family, and in the process, make the PoweRun a little more personal."

For the first time, the Kennett Run will introduce the FundRun, which taps into the enthusiasm -- and strong legs -- of students in the Unionville-Chadds Ford and Kennett Consolidated school districts. For every student who registers under their schools name, to participate in the FundRun (a one-mile fun run), 5k 10K or PoweRun, Kennett Run Charities, Inc., will make a $5 donation to a special project of the schools choosing, at the student's home school.

"When Matt and I considered where we could have growth, we saw the amount of students who have participated in the kids fun run, and it grew 30 to 40 percent every year," Ringler-Friedrich said.  "We realized that this could be where we could make an even larger impact not only in the numbers of the run, but the opportunity to support our community."

"I think it gives children an idea of civic duty, not only to participate in the run, but to give back to the community," Genereux said.

For anyone who has participated in the Kennett Run, they know that the party doesn't end when runners and walkers cross the finish line. Genereux and Ringler-Friedrich said the truest display of civic pride at the Kennett Run is seen at the after-race celebration and awards presentation at Anson Nixon Park.

“The party in the park after the race speaks to the strength of our community, and Kennett Run Charities' commitment to strengthen the community by allowing everyone to participate in the Kennett Run," Genereux said. "It proves that you don't have to do the Run to participate. You can volunteer, you can come to the finish and just celebrate with everyone.