Peter and Amy Flynn received the Farmer of the Year Award.

For anyone who may need a reminder about why God made farmers, legendary radio 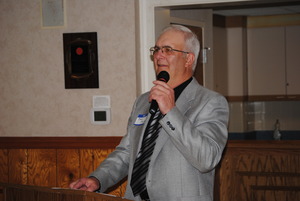 broadcaster Paul Harvey delivered a superb summation on the subject at a Future Farmers of America convention in 1978. Americans enjoy a food supply that is both abundant and affordable because of the efficiency and productivity of family farms. One statistic tells the rest of the story: Ninety-eight percent of us depend on the strong-handed labor of the other 2 percent for our food supply. The annual spring banquet of the Chester Delaware County Farm Bureau recognized the important contributions that farmers make to the community.

“Agriculture is still alive and well in Chester County,” said State Sen. Andy Dinniman, one of a dozen elected officials who turned out for the April 10 event at the Goshen Fire Hall outside West Chester. Dinniman noted that although Chester County is the home to a growing number of high-tech businesses, agriculture and activities related to agriculture remain the county's top industry. 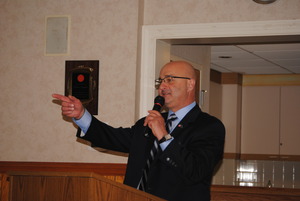 Dan Miller, the president of the Chester Delaware County Farm Bureau, said that this chapter is by far the largest in the state, an illustration of the continuing importance of farming in the area. He explained the overall health of the local agriculture industry is good even as a shrinking number of farmers are expected to produce enough food for a growing population.

According to statistics from the American Farm Bureau Federation, today's farmers produce 262 percent more food than farmers did in 1950, with two percent fewer inputs—which include labor, seeds, feed, fertilizer, etc. Despite a growing population, the U.S. still sells more food and fiber to world markets than it imports, creating a positive agricultural trade balance.

One of the main initiatives of the farm bureau is to educate people about where food comes from, and to remind them of the importance of farming. 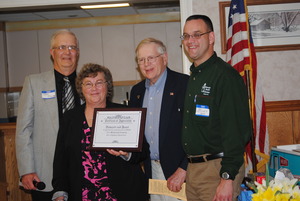 local farmers. According to Hillary Krummrich, Esq., the director of agricultural development for the county,  2013 was the 25th year that these awards were handed out. The 2013 recipients were also recognized at this meeting.

“It's always tough to decide on these awards because we have such great nominations,” Krummrich explained.

The Farmer of the Year Award was presented to Peter and Amy Flynn and Tom and Barbara Schaer.

Peter Flynn is the proprietor of Pete's Produce in Westtown. He leases a 170-acre farm at the Westtown School. He has also been active with the Conservation District and serves on the board of the Chester County Food Bank.

Flynn was one of the first farmers to support the food bank's gleaning program by setting aside a portion of the farm to grow crops specifically for the food bank.

“I wanted people to see what could be grown on just two acres,” Flynn said.

Flynn, a first-generation farmer, started working on a neighbor's farm when he was just 11 years old. He later majored in dairy science before embarking on a career in farming.

He expressed his gratitude for the Farmer of the Year Award.

“We were really honored to receive this award,” he said. “This is a great group to be a part of.”

The Schaers operate a goat dairy and cheese farm in Landenberg. They sell their products to local restaurants and also have a small farm stand on their property. The owners are also both full-time veterinarians at the New Bolton Center.

Miller was presented with the Distinguished Service Award, an honor that two different organizations nominated him for.

“That's the first time that that has ever happened,” explained Krummrich.

Miller enjoyed a 36-year career as the herd manager for a large farm. He was always active in the farm bureau and has been the president of the Chester Delaware County group since 2008.

Krummrich noted that, even in retirement, Miller is dedicated throughly to the farming life. “In his housing development, he manages the community garden,” she said.

Miller said that he's proud to be a member of the farm bureau because it does so much to promote the agriculture industry and is an asset for farmers.

“I feel privileged to be the president because everyone on this board has a passion {for agriculture”,” he said. “Everyone is dedicated to doing what they can for the betterment of agriculture.”

This year, two dedicated members of the Chester Delaware County Farm Bureau, Howard and Janet Robinson, were saluted for their efforts with the group. The Robinsons live in Upper Oxford Township. Howard serves as the membership chairperson for the group, while Janet is the treasurer and editor of the newsletter.

“They work very hard for us,” Miller said. “They know the intricacies of this organization better than anyone else.”

The Pennsylvania Farm Bureau donated $855 in the Robinsons' name to the Lighthouse Youth Center in Oxford because the Chester Delaware County Farm Bureau met its membership goals last year.

Susan Rzucidlo offered an update about the farm bureau's Food Check Out Program. The farm bureau gives out $100 to area teachers so that they can help students learn about all the factors that consumers should consider when making decisions about purchasing food. The teachers take students to a grocery store and teach them about how to make the most of the money. Once the food is purchased, it is then donated to the food bank.

Another popular program is the mobile agriculture lab. Deb Ellis is the coordinator for this program and she talked about how it has grown since it started with one teacher eleven years ago. There are now six mobile agriculture labs that are taken to schools across the state, teaching children about various aspects of farming. The program now reaches 106,000 students in all but four counties in Pennsylvania. Ellis said that the program is definitely having an impact.

“We go back to the different schools and the students remember what we have taught them,” she said.

Pennsylvania state representatives John Lawrence, Tim Hennessey, Stephen Barrar, Dan Truitt, and Becky Corbin were among the legislators in attendance at the event. The state representatives handed out several citations, including one to Doug Fearn and Don Hannum for their efforts in making people aware of the dangers of Lyme Disease.

Chester County Commissioners Terence Farrell and Ryan Costello were also at the gathering to show their support for agriculture.