Democrat looks to unseat congressman in the 16th District Houghton delivers a petition signed by more than 500 people asking U.S. Rep. Joseph Pitts to support an increase in the national minimum wage.

Like so many other Americans, Tom Houghton was outraged by the Republican-led government shutdown in 2013, and appalled by the unseemly and often times irrational partisan politics that has resulted in years of governmental gridlock in Washington D.C.

He watched in frustration as a faction of the Republican Party edged the country toward the fiscal cliff with the debt-ceiling crisis that could have—and should have--been avoided with a little compromise from both sides.

He waited for his own representative in the U.S. House of Representatives, Republican Congressman Joseph Pitts, to be part of the solution rather than part of the problem.

“People are so fed up with the failure to compromise,” Houghton said in an interview last week. “Washington is broken. We have representatives who think that compromise is a four-letter word.”

When Houghton officially announced his campaign to win the Democratic nomination and challenge Pitts on Jan. 27, he promised that if voters send him to Washington D.C. he will go there with the full understanding that compromise is part of a lawmaker's job. Without a willingness to compromise, nothing gets accomplished.

“It is possible to get things done as a legislator,” Houghton said. “I know because I've done it. It's sad that this Congress has been labeled the 'Do Nothing Congress.' We elect members of Congress to work for us, and we have a right to expect results.” 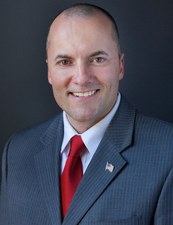 Houghton, 45, previously served two years as a state representative in the 13th District in southern Chester County and more than six years as a supervisor in London Grove. As a veteran of five elections, he knows that unseating Pitts, a well-financed nine-term congressman, will be a big challenge—bigger than a Democrat becoming the chairman of the board of supervisors in London Grove, and bigger than a Democrat winning a seat in the Pa. House of Representatives in the Republican-leaning 13th District.

Houghton said that he ultimately decided to challenge Pitts because the congressman was willing to support Tea Party favorites like Sen. Ted Cruz and U.S. Rep. Michelle Bachmann as they shut down the government. According to Houghton, Pitts' views and votes are much more in line with the Tea Party than they are with constituents in the changing 16th District, especially when it comes to issues like the economy, the environment, and women's health issues.

“The Tea Party has been exposed as being extremist,” Houghton said.

Comparing his own views to those of Pitts, Houghton said, “You could not have more of an extreme difference in viewpoints.”

Houghton, a lawyer, said that he probably wouldn't have decided to run against Pitts five years ago, no matter how opposing their views on key issues are, because it would have been a pointless effort. Back then, the district was still one of the most conservative districts in the northeastern part of the U.S. The Cook Political Report, an independent, non-partisan online newsletter that rates each congressional district based on its propensity for voting either Democratic or Republican, graded the 16th District as an R+11. That's heavily Republican. But then the boundaries for the congressional districts were changed and two predominantly Democratic cities, Coatesville and Reading, were slotted in the 16th district and the Cook Political Report adjusted the rating to R+4.

There is still a sizable Republican edge in voter registration in the 16th District, which is composed of most of Lancaster County, a large portion of southern Chester County, and a sliver of Berks County, but the advantage is decreasing. A Democrat hasn't held the 16th District since World War II.

Houghton compares the  redrawn 16th Congressional District to the 13th District as it was configured in 2006, when he first challenged incumbent State Rep. Art Hershey. There are more registered Republicans than Democrats, but not by such a wide margin that this advantage is insurmountable.

Houghton believes that he can make a case that Pitts is out of touch with constituents on issues like the economy, the environment, and women's health, and that Pitts' views no longer reflect those of the changing 16th District.

Reaching out to moderate Republicans, independents, and women

Houghton has already locked up support from Democratic officials in Chester, Lancaster, and Berks counties that could clear the way for a win in the Democratic Primary in May. That's important, but Houghton can't win in November without expanding his base of support beyond Democrats. He believes that there are enough moderate Republicans and independents in the district who are still angry about the government shutdown and fed up with the partisan bickering to make a difference on Election Day.

He also believes that Pitts' voting record on women's health issues and his opposition to the Violence Against Women Act will cost his opponent some votes on Election Day.

Part of the job will be informing voters about Pitts' track record and making sure that they understand that there is a choice in this election.

Houghton has an established base of support in Chester County, but he will need to introduce himself to voters in Lancaster County, where about 70 percent of the residents in the 16th District reside, and the communities in Berks County that are within the district's boundaries.

His mother was born and raised in Reading, and his grandparents were farmers in Berks County, so he feels like his personal connection to the area will help.

Houghton said that his own track record related to agriculture should help in all three counties.

“I think farmland preservation is still important to residents in Lancaster, Chester, and Berks counties,” he said. “In 2001, I ran for township supervisor in London Grove Township to save the agricultural zone from over-development and sprawl.”

Houghton also pointed out that Pitts has received a rating of 8 percent by the League of Conservation Voters. He believes that issues like this will help him secure votes from moderate Republicans and independents.

Just two weeks into his campaign, Houghton has already been out campaigning on an issue that he believes will be important in this year's election: increasing the national minimum wage.

Houghton noted that a recent study showed that more than half the workers who earn minimum wage work full-time.

“The idea that these workers are primarily high school students working for spending money is a myth,” Houghton said, explaining that a full-time employee who worked for minimum wage would earn less than $16,000 annually—well below the poverty level. He said that the fast-food industry and retailers like Walmart are responsible for many of the low-paying jobs, and the employees end up relying on state and federal assistance programs to provide for their basic needs.

“As spending on assistance programs to those living in poverty skyrockets, the real beneficiary of our tax dollars are the large, extremely profitable companies like McDonald's and Walmart,” he said. “The fast food industry and Walmart alone account for nearly $10 billion per year in federal assistance spending to their poverty-wage employees. By allowing these big corporations, whose CEOs make millions every year, to pay their employees extremely low wages, we are subsidizing these multi-billion dollar profits with our tax dollars. We're tired of paying these corporations to have cheap labor. That's an issue that is resonating with people nationally.”

Reducing the number of Americans who are on assistance programs will have the added benefit of reducing spending at the state and federal levels.

“”By increasing the minimum wage,” Houghton said, “we will not only cut spending on federal assistance programs, and end a form of massive corporate welfare, we will increase the spending power of American families. More spending by workers means more jobs and a stronger economy. The Economic Policy Institute estimates that raising the minimum wage to $10.10 per hour would add over $31.5 billion to the economy and create 140,000 jobs.”

The importance of fundraising

Democratic leaders like Michele Vaughn, the chairperson of the Chester County Democratic Committee, are enthusiastic about having Houghton challenge Pitts in the fall.

“Tom Houghton will be the candidate in the 16th congressional district that voters have been looking for,” Vaughn said. “Tom has always put the needs of his constituents first and worked across party lines to pass common sense legislation that made life better for Pennsylvania families. He has proven through his past campaigns that he will be a hard working and dedicated candidate just as he was a hard working and dedicated public servant.”

“I wouldn't have thrown my hat in the ring, I wouldn't take this time away from my family and my law practice if I didn't think I could win,” he said. “Raising funds will be the challenge. A key will be, can I raise enough funds to compete? He will out-raise and out-spend me no matter what.”

Houghton has a number in his mind of how much he will need to raise to counter the outside money that will flow into Pitts' campaign coffers. The money will be necessary to get the campaign messages out before Election Day.

Houghton said that he views his talents as a campaigner to be a strength.

“I have that experience as an elected candidate,” he said, adding that when he meets constituents, “They can sense within five minutes that I'm in it for the right reasons.”

On the campaign trail, Houghton will take a two-pronged approach to convincing voters that they should send him to Washington D.C. instead of Pitts: First, he will talk about his own accomplishments as an elected official, and then talk about what Pitts' voting record.

Houghton said that by supporting a government shutdown and by opposing legislation like the Violence Against Women Act, Pitts has not adequately represented the voters in the 16th District.

“He doesn't fight for the issues that we need him to fight for,” he said. “The taxpayers of the 16th District deserve a representative in Washington who will stand up for our values and work in a bipartisan way to pass common sense legislation that makes life better for everyone.”