The art of the calendar at Brandywine River Museum In modest American homes from the turn of the century onward, a calendar was often the only art an ordinary person ever saw. Cheap to purchase – often free – calendars were a lucrative endeavor for companies and illustrators alike.

“A Date With Art: The Business of Illustrated Calendars,” which opened at the Brandywine River Museum on Jan. 25, brings together original paintings by four world-renowned artists, along with the printed calendars in which the works appeared.

Howard Pyle, regarded as the father of illustration in America, was apparently a reluctant participant in calendars, and he worried about the intrusion of advertising into his artwork. His 1911 oil, “The DuPont Powder Wagon,” is, however, a strong image with his trademark dramatic shadowing and historically accurate clothing. The lettering on the side of the central Conestoga wagon – “Du Pont's Powder” – is Pyle's only concession to the DuPont Company, which commissioned the 1912 calendar.

More spectacularly, there are large, original paintings by Maxfield Parrish in the exhibit that have lost none of their luminous magic. Parrish embraced calendar projects because they put his artwork into millions of homes and led to a lucrative career of selling prints of his fantasy scenes.

“Reveries” (1926) has a darker hue than the copy of it printed in the Edison Mazda Lamps calendar which is displayed next to it. The reproduction is much bluer than the original, despite the care taken by Parrish in working with printers to reproduce his technically demanding images. 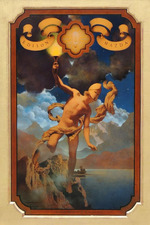 To viewers of the 1920s, Parrish's calendar scenes were magical windows to a world that glowed with fairy lights, rendered with almost three-dimensional realism. The glowing blue-green sky in “The Venetian Lamplighter” (1922) is equally striking in the original painting and its calendar counterpart. Even Parrish's more pedestrian views of New England landscapes and ordinary homes – seen in 1929 and 1945 calendars – still have that unearthly depth and light.

There are four Norman Rockwell paintings on loan that were used in his enormously successful Boy Scout calendars, each showing his meticulous attention to uniforms and equipment, while conveying a clear sense of the wholesome values of scouting.

N.C. Wyeth's usual style – rugged men, dramatic outdoor scenes and historical subjects – made him an ideal choice for calendar commissions by companies that made things like gunpowder and rifles. There's no product placement in his “Over Yonder” (1909), a seldom-seen oil that shows his strong composition, dramatic lighting and a bit of his Chadds Ford heart in the white house and barn tucked away in a hollow, with their windows reflecting the slanting sunlight.

“The Golden Galleon” (1922) is a brilliant ship drifting on mirrored water that recalls the work of Wyeth's teacher, Howard Pyle. It was used in a 1923 calendar of ship images. 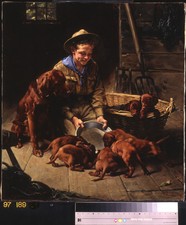 beyond its use in a 1938 Hercules Company calendar. His 1941 “Black Spruce Ledge” – a Maine view of a lobsterman in a tilting boat beneath a mound of stone and sky – is shown (retitled “Time and Tide...”) in a 1946 Brown and Bigelow calendar.

In an adjoining gallery, “N.C. Wyeth's America in the Making” continues the calendar theme with 12 of the artists paintings for a 1940 calendar by John Morrell and Company. The paintings spotlight 12 critical moments or people in the nation's past. Each painting is displayed with a text panel written by a wide range of people – Laura Bush, George Lucas, authors and others – who reflect on what they see in the images.

This loan exhibition has everything about this calendar project. Given its placement less than a mile from Wyeth's home, it has been expanded to include his studio props, easel and table, his preparatory sketches, handwritten notes, and the glass slides of his sketches that he projected onto panels to complete the paintings.

While not as artistically rich as Wyeth's earlier works in some instances, the 12 paintings dovetail perfectly with the artist's patriotism, his love of the past and his gift for selecting the precise dramatic moment for each composition.

While calendars today are filled with pop culture, photos and cartoons, it's rewarding to see how much care went into producing them in decades past. The large scale of the finished calendars showed the respect given to the artwork. The companies clearly felt that giving each painting room to be appreciated was in their best interests, and it kept their name in front of the public for 12 months. Calendars were a perfect marriage of commercialism and art, and the examples on view at the Brandywine through May 18 are wonderful examples.