Dairy farms are a family industry Cows line up at the Glenville Farms stalls.

“Drink your milk. It’s good for you!”

Children hear these words every day. From Elsie the cow to “Got milk?” commercials in recent years, dairy products have remained part of our awareness of a healthy diet. Generating revenue of $4.5 billion, dairy operations make up the largest sector of Pennsylvania’s agriculture industry, with Chester County ranking fifth in the state. From very large farms to small ones, local dairy businesses boast one commonality -- 98 percent are family owned and operated. 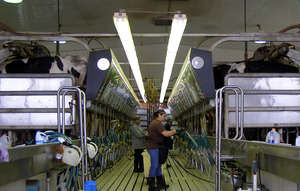 The United States is the second largest producer of milk in the world (India is number one). Not all cows are created equal -- Linebacks are known for high protein, Holsteins for higher volume production, and Guernseys for their increased milk fat. A cow consumes roughly 50 pounds of dry food and 25 to 50 gallons of water per day. Milk is white because of casein, the protein that is rich in calcium. It takes ten pounds of milk to make one pound of cheese and 12 pounds to make one gallon of ice cream. Due to improved techniques, annual U.S. milk production per cow increased four-fold from 1950 to 2011.

In addition, the product which reaches markets is quite fresh. On average, the milk you buy today was still inside the cow three days ago.

There are approximately 280 dairy farms in Chester County. They operate in relative solitude 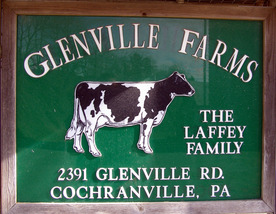 despite the encroachment of busy shopping malls and housing developments. Owners of these farms have learned to adapt to limits on their expansion while still playing an important role in our economy.

One sizable operation is Glenville Farms in Cochranville, owned and operated by the Laffey family since 1951. The property was originally used to support a cotton mill which dates back to the Revolutionary War. The family maintains a herd of Holstein cows with 26 hard-working employees. After weathering weak industry conditions, Glenville Farms has rebounded, expanding their herd by 50 percent -- from 1,000 to 1,500 cows -- since 2007.

You might think there’s nothing sophisticated about milking cows, but you’d be surprised. Glenville Farms became computerized more than a decade ago, tagging their cows with microchips for efficient monitoring of production. Using sophisticated machines, Glenville can milk 40 cows simultaneously, a rate of 200 cows per hour. Their Holsteins are milked three times a day, each producing roughly 26,000 pounds of milk per year. 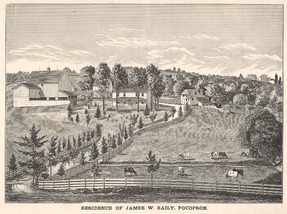 Running the largest dairy farm in Chester County, the Laffeys love the business and are committed to its success. Like many other farms in the area, Glenville sells their milk to a large co-op (cooperative). Prices are set monthly in advance, so the individual farmer has limited control over what his production will bring him. In times of falling milk prices and rising costs for feed, Glenville and other dairy farms experience diminishing profit margins, as they saw a few years back, when corn prices skyrocketed.

In Unionville, Pocopson Meadow Farm has 85 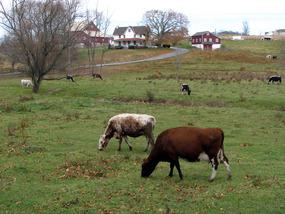 milking cows and less than ten employees. Designated a “Pennsylvania Century Farm,” the operation, which began in 1874, has been in the Baily family for more than four generations. It was even mentioned in Futhey and Cope’s book, “History of Chester County.”

The farm has earned the prestigious “Dairy of Distinction” award. They raise hormone-free cows, because owner Bernard Baily maintains that this allows his herd to produce a unique, high-quality product which goes into their skim, regular and chocolate milk.

After years of dealing with the uncertainty of wholesale prices, Bernard decided to go retail, 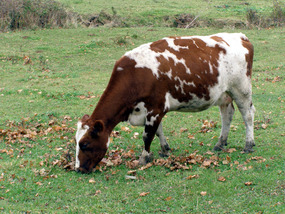 building both a pasteurization and bottling operation on-site. He now sets his own prices, managing profitability by selling Baily Dairy milk and other products at his farm and to local privately owned markets. Their bottles reflect a friendly manner, with an image of a cow gazing into your eyes over the quote, “From Our Family to Yours.”

A century ago, America’s economy was largely agrarian, with hundreds of thousands of farms operating around the country. Today only 2 percent of the population is involved in farming -- and the numbers keep shrinking. Some younger family members question participating in their household heritage, finding the allure of a high-dollar sale to developers too strong and the work too hard. 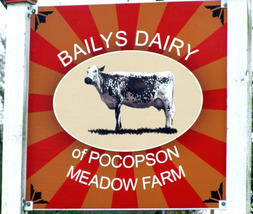 For those who love farming, the dairy industry is rewarding, yet challenging. They persevere, rising early each day, putting in long hours doing difficult tasks, going to bed tired, but satisfied. Dairy farmers are a hard-working breed who know that what they do provides a critical product for society. So, as we sit down at the table to enjoy good, wholesome food, we can all give them thanks for their work and dedication.

Gene Pisasale is an author based in Kennett Square. His six books and lecture series focus on local and regional history. Visit his website www.GenePisasale.com or e-mail him at Gene@GenePisasale.com.