The five Kennett Consolidated School District school board members who won election last month were sworn in at the reorganization meeting on Dec. 2. They are (from left to right) Douglas Stirling, Kendra LaCosta, Joseph Meola, Heather Schaen, and Janis Reynolds. School board member Dominic Perigo administered the oath of office.

As she began her duties as president, Schaen said that it would be a challenge to match the level of professionalism that Stirling brought to the job in the last year. 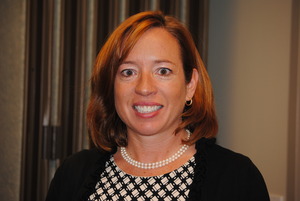 The reorganization meeting began with the administration of the oath of office for the five members of the school board who were elected or reelected in November. Stirling will represent Region A (Kennett Square) for another term. In Region B (New Garden Township), Kendra LaCosta and Joseph Meola are the board members who were sworn in. Incumbents Heather Schaen and Janis W. Reynolds were both reelected from Region C (Kennett Township). Of the five new members, only LaCosta is a newcomer to the remarkably stable school board. 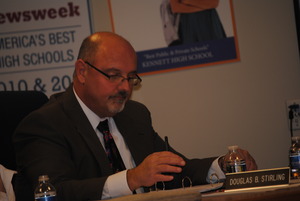 She said that she has been very involved with the schools and is very impressed with how the district runs. Part of the reason that she decided to seek a seat on the board, she said, was because she knew how effectively the board worked together.

Also at the reorganization meeting, the school board approved a motion to continue to meet at 7 p.m. on the second Monday of each month except August, when there is no meeting, and December, when the board will meet on the first Monday of the month. The following are dates and locations for the 2014 meetings: