The headstones of veterans will once again be decorated with wreaths this holiday season thanks to Wreaths Across America. Local coordinator David Hamilton hopes that all of the more than 1,100 veterans buried in the Oxford Cemetery will be honored this year.

When the 22nd annual Wreaths Across America culminates with a simultaneous wreath-laying ceremony at more than 570 locations around the world at noon Eastern Standard Time on Saturday, Dec. 14, David Hamilton hopes that there will be wreaths placed on the headstones of more than 1,100 veterans who are buried in the Oxford Cemetery.

Hamilton is the local coordinator for Wreaths Across America. 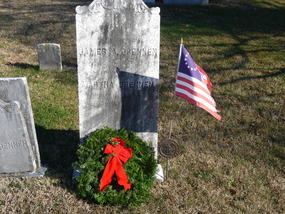 “Last year, we were able to raise enough money to lay the wreaths on the graves of 472 veterans,” Hamilton said, adding that this is a significant increase from the 60 wreaths that were collected during Oxford's first year of participation in 2008. The growth of the project in Oxford mirrors what is happening nationally, as the event grows larger each year. The goal of Wreaths Across America is to eventually have the grave of every veteran in the country decorated with a wreath to honor them during the holidays. This year, the Oxford Cemetery is one of approximately 300 in the U.S. that will be decorated as part of the Wreaths Across America project. A total of 570 locations around the world will be included in the Dec. 14 ceremony.

“The purpose of Wreaths Across America is summarized by the motto 'Remember, Honor, and Teach,'” Hamilton explained. “Remember our fallen heroes, honor those that serve our country, and teach the younger generations about the service and sacrifices of veterans, active military, and their families.”

The seeds for Wreaths Across America were planted long ago when a 12-year-old paperboy for the Bangor Daily News won a trip to Washington D.C. Morrill Worcester would never forget his first visit to the nation's capital. The Arlington National Cemetery, in particular, made an indelible impression on him. This experience followed him throughout his life and successful career in business as the owner of Worcester Wreath Company. He was constantly reminded that his good fortune was due, in part, to the values of the country and the veterans who made the ultimate sacrifice in support of it.

Twenty-two years ago, Worcester found his company with a surplus of Balsam Christmas wreaths at the end of the holiday season. He came up with an idea to honor veterans by placing those wreaths on the headstones at Arlington National Cemetery. He enlisted the help of Maine Senator Olympia Snowe, and arrangements were made to have about 5,000 wreaths places in one of the older sections of the cemetery—a section that had fewer visitors with every passing year.

As the effort was being organized, other individuals and companies offered their help. A local trucking company owner provided transportation for the wreaths all the way to Virginia. Volunteers from the local American Legion and VFW Posts gathered with members of the community to decorate each wreath with traditional red, hand-tied bows. Members of the Maine State Society of Washington D.C. led the effort to lay the wreaths on the graves, which included a special ceremony at the Tomb of the Unknown Soldier.

The annual tribute went on quietly for years. Then, in 2005, a photo of the headstones at Arlington, adorned with the wreaths and covered in snow, circulated widely on the Internet. The project suddenly received national attention and requests from all over the U.S. poured in as people wanted to help with the Arlington National Cemetery effort or emulate it in state or local cemeteries.

Worcester began sending seven wreaths to every state, one for each branch of the military, and for POW/MIAs. In 2006, with the help of the Civil Air Patrol and other civic organizations, simultaneous wreath-laying ceremonies were held at over 150 locations around the country. The Patriot Guard Riders volunteered as the escort for the wreaths going to Arlington. This began the annual Veterans Honor Parade on the East Coast each December.

Hamilton said a family visit to Arlington Cemetery in 2006 sparked his interest in helping out with the project.

“It's a way of giving back to the veterans,” Hamilton said. He added that honoring the veterans is also a way to pay a tribute to the country's history, and to keep that history alive for the next generation of U.S. citizens. He explained that among the more than 1,100 veterans buried in the Oxford Cemetery, there are men who fought in the Revolutionary War and two others who were involved in Indian conflicts. There are numerous soldiers from the Civil War right up through to the Persian Gulf War who are buried in the cemetery.

Hamilton, who is very involved with the Boy Scouts, said that he uses the veterans as an opportunity to teach youngsters about not just U.S. history, but local history as well. He said that 35 or 40 Boy Scouts helped out last year, and more are expected to lend a hand this year.

“The history is going to be forgotten if we don't teach it to our kids,” Hamilton said.

Hamilton also credited Laura Sperratore with being a driving force behind the effort in Oxford, saying that she was now responsible for most of the organizing work. The local American Legion serves as a sponsor for the Oxford group, so for every two wreaths that get ordered, the organization receives a third one for free.

Hamilton said that numerous local companies and businesses are helping achieve the goal of placing wreaths on all the veterans in the Oxford Cemetery. Oxford Plumbing & Heating donated $1,500 this year, and is a faithful donor year after year. Lincoln Way Electric, Ruffenach Family Funeral Home, and Sperr's Fuel Oil & Heating have also each made generous donations to the cause.

While reaching the goal of honoring all the veterans in the Oxford Cemetery would be satisfying—and important—Hamilton would like the effort to expand to the point where even smaller cemeteries in the area could be included. Currently, the Oxford Cemetery is the only one in this part of Chester County to be a part of Wreaths Across America.

Hamilton said that he is proud to play a small part in an endeavor that includes so many in the community.

“It takes a lot of help from a lot of people to do this,” he explained. “It's a way to remember our veterans. It's very important to remember those who served.”

To donate a wreath for the cause, visit www.wreathsacrossamerica.org.