Foyle jumps the final fence in the lead. The horse to his left still finished the course without its jockey.

A spectacular fall day made the 79th running of the Pennsylvania Hunt Cup Races on Nov. 3 even better. 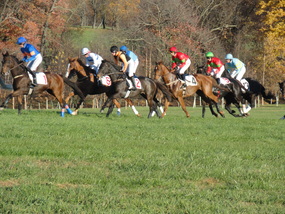 Seven landowners allow the Hunt Cup to include their properties as part of the four-mile course of timber fences and Unionville countryside. As always, the race card started with the Pony and Junior Hunt Cup races.

The small and medium pony race was contested by 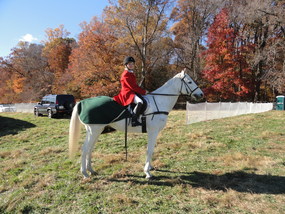 nine young riders, all 16 or younger. Although most local pony races have the young riders just race a short distance on the flat, the Pennsylvania Hunt Cup's format is different. The children start off following an outrider around an abbreviated course at a moderate pace. The course, in total, is about 1.5 miles and includes jumps not to exceed 2-feet-6-inches. The rules forbid any young rider to pass the outrider; the penalty being elimination. After one loop, the outrider picks up the pace and eventually pulls out and releases the field, letting them finish on their own.

Taylor Leatherman of Frederick, Md., won the race aboard her Splash, a 5-year-old paint mare.  "I like this format better because I love to jump!" said the 14-year-old. She was excited about her win, as it was her first time racing at the Pennsylvania Hunt Cup. 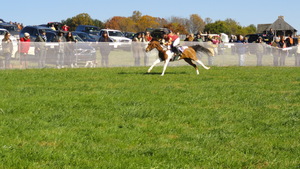 "Our races in Maryland are done for the year and this race is part of a series for points so we decided to come," she added.

Like many of the other young riders, riding is in Taylor's blood. Her mother trains racehorses and foxhunts with her regularly with Caroltine Hounds.

Members of Rivers Hill Foxhounds once again served as outriders for the races. Their primary job is to catch any horses that may have lost their jockeys during the race, so they don't interfere with the ongoing race.

Jennifer Henderson loved her first experience as an outrider. "It's just been great so far. There 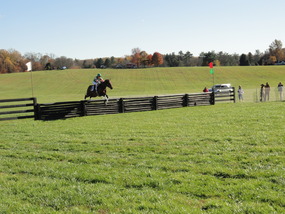 have been a few run offs and I brought back two jockeys who were unseated," she said.

She felt very confident aboard Willy, a 22-year-old Thoroughbred owned by Rivers Edge Master of Foxhounds James Paxson. "He's been there, done that," she explained.

The sanctioned races were exciting, since there were big fields and a number of very close races. The Lewis C. Ledyard Memorial, a maiden timber race, was oversubscribed, so it was split into two divisions. The first division came down to the wire with a number of horses that could have been victorious. Snow Secret Gin eked out the win, with Jewel of the West, Be Great, and Rippin and Runnin all in close contention. 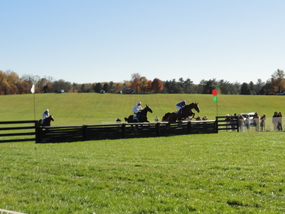 The second set was the total opposite, as the winner, Nat Grew, had a huge lead at the final fence and no one was in reach of the lead as they headed to the finish line.

The featured race, the Pennsylvania Hunt Cup, encompasses a course of four miles with 22 fences. The purse is $35,000. While 13 jockeys and horses were game for the challenge, the field quickly dwindled as about half fell or misstepped and lost their riders.

The outriders had their work cut out for them trying 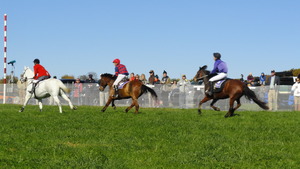 to catch the loose horses, as they can be a hazard to the other horses still racing. One horse in particular appeared to be enjoying his game of eluding capture for the majority of the race.

In the end, Foyle, a brown, 8-year-old gelding who ran the entire race well, emerged victorious.