AGREM (Avon Grove Regional Emergency Management) is an organization one hopes to never need. But when something happens in the greater Avon Grove community, whether it be a weather event, chemical spill or flooding, this organization will be on the scene responding as needed. AGREM now has the ability to bring two mobile Emergency Operations Center (EOC) vehicles anywhere in the region where an emergency has occurred to help those affected. 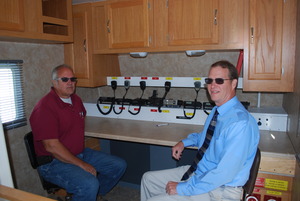 “It was a total community effort with contributions of equipment, labor and funds to make this possible,” said Chuck Freese, the Emergency Operations Coordinator for AGREM and owner of FreCom, Inc.

Years ago there was an old beat-up trailer that AGREM used as its EOC, but in a deteriorating condition, it wasn't safe or wise to store all the needed communications equipment and electronics in it. The equipment was removed and stored until a new solution was found.

The solution came when FEMA had an excess of housing trailers and mobile homes that were used as temporary housing after Hurricane Katrina. These units were stored in a parking lot at the Farm Show complex in Harrisburg and had to be removed before the annual Pennsylvania Farm Show. FEMA made them available to the emergency management community at very reasonable rates. Two Coachman campers – a 20-foot and a 26-foot trailer – were brought to Avon Grove.

Jim Mc Limans, a volunteer with West Grove Fire Company for more than 30 years, was 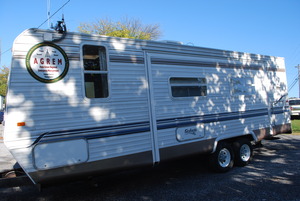 approached to see if he would be interested in converting the standard campers into command centers. His answer, “Why not. I'll do it.” Helping in the community and giving back is important to Mc Limans. “I believe if you can give something back to the community then you should.” With the support of his family, they all worked whenever they could on the renovations.

“The original trailer set up was not conducive for AGREM's purposes,” said McLimans. His wife Kathy, and sons Chris (graduated in June from AGHS) and Michael (sophomore at AGHS) helped him rip out the stove, beds, cabinets, and counters. They rearranged the interior with a communications center, and a meeting area. Wiring the new communications center was a huge part of the job. The project also included adding a large generator, battery system, and propane tanks.

Equipment donations came from FreCom and Medic 94. West Grove Borough purchased one of the trailers and stores it at their facility. Funding for the project came through donations from Jackson Immuno Research Lab, Jennersville Regional Hospital, and SECCRA. 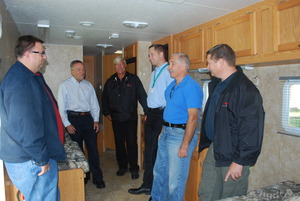 David Flad, AGREM's president, said it is great to have the EOC trailers operating and will be of benefit to the community if/when something were to happen.

There are upgrades AGREM would like to make to the EOCs. They are looking for donations of office furniture, especially swivel chairs, lap top computers and LCD projectors.

AGREM is a consortium of representatives from the West Grove and Avondale boroughs, and the townships of Franklin, London Britain, London Grove, New London and Penn.