On Oct. 26, about 35 volunteers took 150 donated bikes, cleaned and refurbished them and 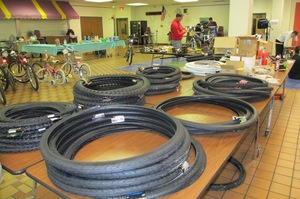 loaded them onto a truck for storage until they are given to area families in December through the Kennett Food Cupboard. Anne Jung, who has coordinated the bike project for three years, said this year's event went smoothly. 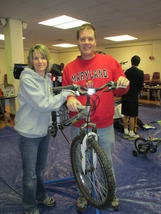 "We have about 130 bikes this year," she said during a break in the Patton Middle School cafeteria, where the bikes were repaired. "We tried to be a little bit more selective this year, and kind of steer away from rusty bikes. For the most part, though, they're in pretty good shape."

The bikes are donated by families who no longer need them, and all of the six schools in the Unionville-Chadds Ford School District get involved somehow - donating bikes, raising money to purchase replacement parts, or supplying volunteer labor to tune up and wash the donated bikes. Two Men and A Truck donates a large truck used to move the refurbished bikes to a storage location until they are given away on Dec. 21. 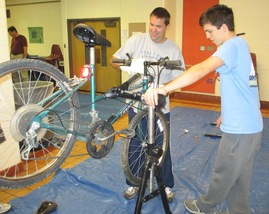 repairs, along with the Delaware-based Garrison's Cyclery. School PTOs raise money and help make lunch for the volunteers on the cleanup day as well.

"We make sure the bikes aren't rusty, we replace the seats, the tires, the chains," Jung said. "It's worth it in in December, when you see people's faces. We also give to families in the district first. I contact the school nurses and they give me a list of how many they need. Certain families can request that their child would like a bike and they can't afford it, so they get them first. That's maybe 20 or 25 families." 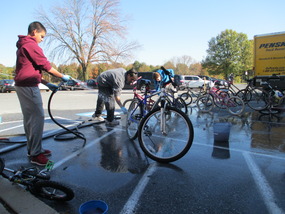 The work got started at 9 a.m. on Oct. 26, and Jung said they expected to load the truck by 4 p.m. In the Patton parking lot, there was a wide range of bikes - everything from scooters and a push tricycle for a toddler to adult-size 12-speeds.

Mark Jung, Anne's husband, said he's learned a lot about fixing bikes in the three years he's been involved in the project. "We get a lot of support from the community and the schools," he said. "And it's fun."