Volunteers recently built a trail bridge in Banffshire Preserve in Franklin Township. Budgeting for completing another three bridges has been put on hold.

Anyone who has taken on a home improvement project knows how the cost can spiral out of control. The Franklin Township Board of Supervisors confronted that fact at their Oct. 16 meeting when the issue of building footbridges in the township-owned Banffshire Preserve came up. 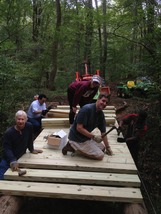 Supervisor Paul Overton has led the way on a long-term project to put public trails into the township's preserves. The rugged terrain of the Banffshire Preserve, located north of Chesterville Road, has proven to be a challenge, with several areas where walkers must cross small streams on the property. Overton detailed the costs and materials for the bridges at the meeting.

"My intention was always to have four bridges," Overton said -- three in Banffshire and one on the Keen Trail. The bridges, designed with two telephone poles laid across the stream and wooden planking nailed on top of them, have been complicated by several factors. The poles, which Overton hoped to have donated, have proven to be hard to find. When he did get nine donated, they proved to be so heavy that he had to call in outside help to move them to the preserve, at a cost of $600. It had been hoped that one of the bridges could be a Boy Scout project, but the weight and complexity of the project proved to be too much, so Overton had to rely on a group of volunteers.

Along the way, a bridge needed to be made wider and stronger to allow a Gator vehicle to use it, increasing the cost of the wooden decking. Bridges that are over a certain height are also required to have handrails, further adding costs. The cost for a basic foot bridge without handrails, Overton said, is $280.

There's also a culvert that has collapsed on the maintenance access road in Banffshire, which would prevent emergency and maintence vehicles from getting into the preserve. A replacement pipe and installation will be around $500.

In the final total, Overton said he needed $3,231 to finish all the bridge installations this year before the ground freezes. Overton's term on the board is over in December. "This is my favorite project," he said, "and I'd like to wrap it up before I leave and invite the public in."

Supervisor John Auerbach confronted Overton on the issue, saying, "My issue with this is the scope of the project. We had agreed that we needed one 40-foot bridge into the preserve. I just recently found out that we need four bridges. I was shocked. I did not expect this."

Auerbach outlined total costs of $24,165 for all the work done so far in the township's preserves, including a new parking lot. The parking lot itself was budgeted at $10,000 and ended up costing $14,000. "We've spent all this money, and we're not done yet," Auerbach said. "I am not happy with overspending our budget like this."

Supervisor Penny Schenk criticized Overton as well. "You took on this major undertaking all by yourself and went off on this tangent without any concensus from the board," she said.

With the end of the budget year approaching, total dollar amounts are in flux, but Auerbach maintained, "I am concerned about spending this money now. I don't see the disadvantage of waiting until we get next year's budget done."

Both Auerbach and supervisor Eric Brindle agreed with Overton that the bridges needed to be completed at some point. "I can commit to accommodating it in next year's budget," Auerbach said.

Overton pointed out that there is $130,000 remaining in the park capital account, and suggested taking the $3,231 from there, instead of using the maintenance budget. That idea was rejected.

Several members of the public commented at the meeting that the Banffshire Preserve is beautiful, and that bridges are needed, particularly for mountain bikers.

Bob Gaston, of the Delaware Trail Spinners biking group, told the board that members had contributed volunteer labor for the trails project. "There's an equivalent trail done for one of your township neighbors, at a cost of $30,000 per mile, so in that context, this is very inexpensive," he said. "I feel you have a beautiful opportunity here, and I applaud you for moving forward on this."

Auerbach agreed, saying, "I think it's the most beautiful piece of land we have. I'd say to all the volunteers, 'Hang on -- we'll get it done.'"

The board also discussed the removal of the concrete silo that's still standing after the demolition of the J.G. West barn near the township building. The stone walls will be picked up by a contractor soon, and Auerbach recommended paying an additional $3,000 for the contractor to pull down the silo while he was at the site to collect the stone.

"I believe the price is low, and removing the silo will facilitate regrading," Auerbach said. The ramp that led to the former barn needs to be removed, along with the adjacent silo.

In a situtation that strongly resembled the cost overrun for the preserve bridges, Auerbach was told that the budget for the barn demolition was overspent by $19,000, and asking for another $3,000 was not in the budget.

"I object to the scope of this project," Overton told Auerbach.

Supervisor Nan Latimer suggested that the silo removal should be budgeted for next year, and Auerbach ultimately agreed.

"We'll defer this to next year's budget," he said. "We don't have it in the budget right now."