Students wrote what they like about the After-The-Bell program on the banner for the 15th anniversary celebration.

For the last 15 years, students in the Kennett Consolidated School District (KCSD) have benefitted from a program that offers a wide range of activities from 2:30 p.m. to 5 p.m.—crucial hours during the day when some youngsters are unsupervised. As the After-The-Bell program kicked off its 15th year on Oct. 17, local educators, public officials, and police officers lauded the program for providing activities for youngsters in a safe environment. 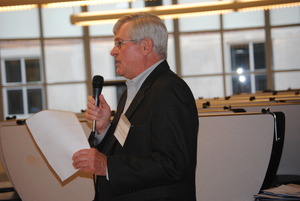 Rudy Karkosak served as the master of ceremonies at last week’s presentation at the Kennett Middle School. The After-The-Bell program was already in place when Karkosak became the superintendent of KCSD in 1998.

“I just thought it was the best possible program,” said Karkosak, who is now the president of After-The-Bell’s board of directors. Karkosak credited the program with helping students score higher on standardized tests and continue their education after graduation.

The kickoff celebration was coordinated to be a part of a larger Lights on Afterschool event that involved more than a million people across the country. Each year, thousands of communities celebrate Lights on Afterschool to highlight the importance of afterschool programs that keep kids safe, inspire them to learn, and help working families.

“It’s so good for our kids in Kennett,” said Connie Logan, a former KCSD teacher who now serves on After-The-Bell’s board of directors. “We still have a lot of students from the high school who come back to help out the middle school students. It’s good for kids and we need to do everything we can for kids these days.”

“This is such a unique and awesome program,” said Christina Gorman, the PTO president at the 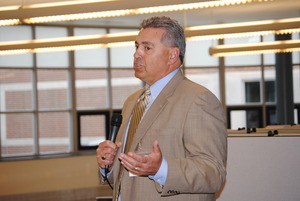 Kennett Middle School. “It’s an opportunity for them to try something they haven’t done before in a safe environment.”

The After-The-Bell program got its start in Kennett Square when the Episcopal Church of the Advent surveyed the community and found that there was a glaring need for more afterschool activities for children. John and Denise Wood and Marshall Newton led the effort. They reached out to then-superintendent Dr. Larry Bosley who said that KCSD would partner with After-The-Bell and provide space in a school to hold the activities.

“When they started it, they talked to—and listened to—everyone,” Logan said. “What they heard is that we needed something for middle school students after school.”

A Time Magazine article highlighted the After-The-Bell program shortly after it started with the following: 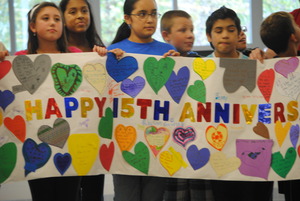 “The need for such a program in Kennett Square, home of a thriving mushroom industry that has drawn an ethnically diverse population of 22,000 was revealed to Denise Wood and Marshall Newton while they were working on a three-year community quality-of-life survey sponsored by their church. One of the recurring laments heard on taped interviews conducted by Newton, a former financial manager for DuPont, was the lack of activities for children between the end of the school day and the time parents return home from work.”

That magazine article noted that the program would not cost the school district or taxpayers anything and described the program as a gift from one generation to another.

In the first year of the program, 40 students took part in the activities. Now, between 300 and 350 students are served. There are three six-week sessions in each school year. Between 50 and 70 activities are offered each cycle in the areas of academics, technology, health, science, creative arts, or cultural awareness. A team of more than 200 community volunteers run the activities.

The program serves a very diverse student population. According to statistics for the 2012-2013 school year, 42 percent of the students were classified as economically disadvantaged and 33 percent were English as a Second Language learners. Nineteen percent were special education students.

Students who were at the kickoff event last week said that they enjoy the activities. Lily, a sixth-grader at the Kennett Middle School, said that she was in a different school last year and was able to participate in the Reading Olympics. She would not be able to do that in Kennett were it not for the After-The-Bell program.

Cameron, also a sixth-grader who is participating in the Reading Olympics, said that she has already read five books.

Dori Carson, who serves as the program director, said that they are pleased to be able to provide additional computers and Internet access to students who take part in the Brain Base activity. There is also a bilingual instructor to help with the class.

Carson added that After-The-Bell has partnered with numerous other non-profits in the area, including the Bayard Taylor Memorial Library, the Chester County Technical College High School, and the Garage Youth Center.

Law enforcement officials expressed their enthusiasm for the program.

“It’s an outstanding program and we’re glad to be a part of it,” said New Garden Police Chief Gerald Simpson.

Edward Zunino, the police chief of the Kennett Square Police Department, said that the involvement of the police officers with the program allows them to establish critical relationships with youngsters. The students never forget the positive experience with police officers, and that helps shape their attitudes as they grow up.

Elected officials also talked about the value of the program to the Kennett community. Kennett Square Borough Council president Dan Maffei read a proclamation honoring After-The-Bell and said that it is a key to helping children in the community become successful adults.

State Rep. Chris Ross said, “I have the pleasure of remembering when this program started. They wanted {students} to learn new things, to try new things. It’s special for me to see the program survive, prosper, and grow.”

Dr. Barry Tomasetti, the current superintendent of schools, thanked the dedicated volunteers who give of their time and talents to help others.

“The one thing I always said about Kennett is that the community really supports the schools,” he said. “Whenever there was a need that the district couldn’t meet, the community rallied to meet the need. There are a lot of people who care about these students and that’s the bond that brings everybody together.”