The driving forces of Unite for HER: Cameron Cavuto, Sue Weldon, and Julie Hillhouse.

A crisp fall day and a great cause brought more than 200 runners and walkers out to Anson B. Nixon Park on Oct. 13. 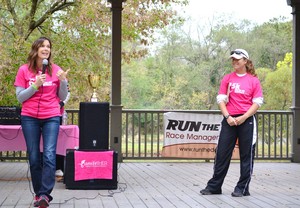 The first Run for HER 5K, to benefit Unite for HER, was a joint venture of Julie Hatfield, owner of J Hatfield Fitness in Unionville and Sue Weldon, founder of Unite for HER. A breast cancer survivor, Weldon started the West Chester-based non-profit in 2009 to aid other women battling breast cancer by providing, at no cost to the patient, an array of healing therapies including acupuncture, yoga, massage, and nutrition.

Both women were thrilled at the turnout. Hatfield, whose business focuses on developing lifetime fitness skills in children and adults, said, "Between Sue and me, we had a great community outreach. We did a lot of social media promotion and then just word of mouth."

"This is great," Weldon said. "I hope it will continue to grow like the Pink Invitational!" Now in its 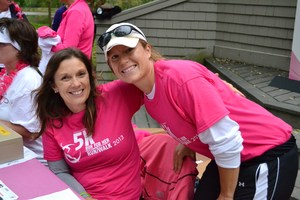 sixth year, that annual team gymnastics event benefiting Unite for HER has grown to 2,900 participants, necessitating a move from United Sports in Downingtown to the Pennsylvania Convention Center in Philadelphia for its 2014 dates, Feb. 21 to 23.

Some of Hatfield's young athletes came out to support the event.  Two of them, Noelle Wilson, 10, and Elle Slachta, 9, both of Glen Mills, were presented with a trophy to acknowledge that they had collected the highest dollar amount in donations for the event.

"We just went to our neighbors and told them we were running today to help people with breast cancer," explained Wilson. Nodding her agreement Slachta added, "And we are also here to support our coach, Julie." 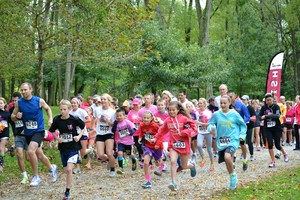 Students from Hillside Elementary School in the Tredyffrin-Easttown School District, along with their parents comprised another group with a large presence at the 5K. They came for their teacher, Rachel Paster, a breast cancer patient. The group, with the name Rachel's Roadrunners, was also awarded a trophy for the largest team.

Twelve-year-old Connor Ash says he heard about the 5K from some friends. "I just love running and thought this would be a good warm-up because next weekend I am running my first half-marathon," he said. In addition to running cross-country, the Unionville seventh grader plays baseball and lacrosse.

Not all of the participants were as serious as Ash, who finished with the second fastest time out 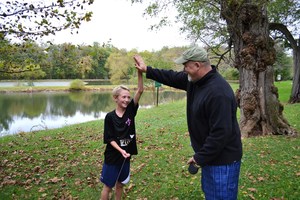 of all the participants. But, no matter what pace they chose, each crossed the finish line with a smile.

Including the awards ceremony, the event finished up before 10 a.m., leaving families the rest of the day for other activities. Weldon said that the timing was great, since they had a tattooing event (both permanent and temporary) to attend in the afternoon.

Julie Hillhouse, Unite For HER's communications director, explained, "While the Pink Invitational is definitely our largest resource, we host a number of other events and the list keeps growing." 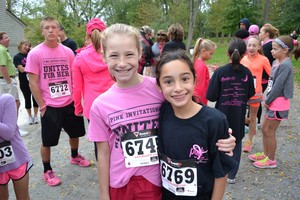 The Mother's Day fashion show, featuring breast cancer survivors as models, has quickly become a favorite of many. "We keep trying to engage our community," Weldon added. "Through events like the fashion show, attendees get to meet others and share their stories. That's what it's about - connecting."

Hillhouse is excited about a new event, Harvest, slated Oct. 24 at the Phoenixville Foundry. This event will feature culinary experts from Philadelphia and local restaurants, wine and beer, musical entertainment, and a silent auction.
As special events manager for the organization, Cameron Cavuto has been busy getting local middle school, high school and college sports teams involved. "The students raise funds through raffles, bake sales, car washes and T-shirt sales. Usually, a 'Pink Game' - a sporting event of some type -- is also included," she said.

Then, depending upon the amount of money they raise, the group will be awarded a grant for a member of their local community. "Not only are they learning about giving back [to Unite for HER], but they are also helping a community member," Cavuto said.
For more information, visit www.uniteforher.org

Run For HER 5K [4 Images] Click Any Image To Expand anson b. nixon park fundraiser 5k run for her 5k unite for her