The reason for the Run Matthew Genereux, the president of Kennett Run Charities and Nadiene Ringler-Friedrich, the race director, will each be serving a third year in their respective roles for the 25th anniversary Kennett Run. The event raises money that is then distributed to charities in the southern Chester County community.

The big race in the small town produces big results.

Officials from Kennett Run Charities, Inc. handed out grant awards to three dozen non-profit organizations at the 24th annual awards reception for sponsors and grant recipients that took place at The Market at Liberty Place in Kennett Square on Oct. 3. 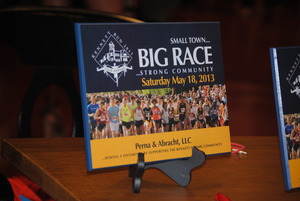 “This is not just a run, this is a charity event. We want to give back to the community,” said Matthew Genereux, president of Kennett Run Charities.

The 24th annual Kennett Run took place on May 18 and was very successful.

“This was a great year for the Kennett Run,” said Nadiene Ringler-Friedrich, the race director. “It’s extremely exciting to be involved with an organization that supports so many charities. Our focus in the last few years has been to showcase that it’s a small town with a big race.”

Mary Pat Knauss is the grant coordinator for the Kennett Run. She has the duty of screening all the non-profits that request funding each year. Knauss said they received approximately 50 applications for grants.

“The requests that we receive are about four times the money that we have available,” she said. 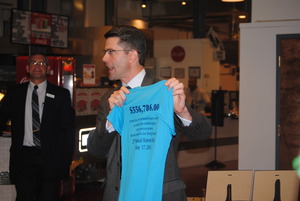 “We have criteria that we use to screen the applicants. We look at how impactful their work is in the community.”

“The board takes great pride in looking at these groups closely,” said Genereux, adding that he’s pleased that the organizations that Kennett Run Charities supports all provide services to the local community.

Jackie Maas of the Tick Tock Learning Center said that the organization has come to rely upon the contribution from the Kennett Run.

“It’s one of the grants that we count on,” she said. “We can focus in on a specific need for the kids.”

Maas, who said that she helps out on race day by assisting with registration, said, said that the Tick Tock Learning Center used Kennett Run funding to help pay for a new playground one year. Another year, they spent the money on sports equipment. She concluded, “It’s a good charity with good people. It’s community helping community.” 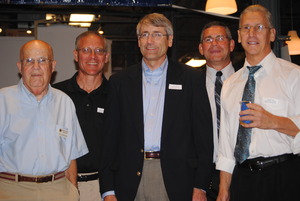 Monica Buffington, the executive director of the Kennett Symphony, said that the organization will be using this year’s grant award to help with expenses associated with the search for the next music director.

“The Kennett Symphony family is grateful to Kennett Run Charities and the work that they do,” Buffington said.

The Kennett Run supports a variety of non-profit organizations, ranging from the Garage Community & Youth Center to the Kennett Area Park Authority to the Kennett Education Foundation to several fire companies.

According to Genereux, it is the support from the corporate sponsors of the event that allows the Kennett Run to generate proceeds each year that can then be used for the grant awards to non-profits.

“You look at the 26 corporate sponsors,” Genereux said. “It’s expensive to put on one of these 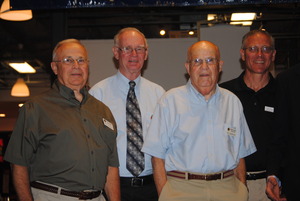 races. Without those corporate sponsors, we could not give money back to the community.”

Genereux noted that the sponsors of the event are comprised of local companies, business owners and professionals who support the Kennett Run because they want to give back to the community.

“A lot of these people don’t want to be showcased,” he said. “It’s people who really care. They just want to give.”

Genereux praised Michael Perna, a founding member of Kennett Run Charities, for helping to shape the vision of the organization in 1990.

“He had the vision for this,” Genereux said. 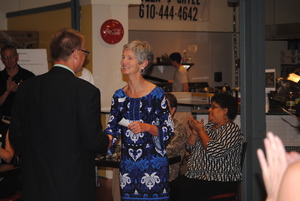 In the 24 years since it started, the race has grown into an enormously popular regional event that attracts runners from all over.

While Perna is pleased that the Kennett Run has matched the initial vision for the event, he is not surprised.

“That was the plan from the start and it was a rather ambitious plan,” said Perna, an attorney with Perna & Abracht. “We planned for the event to grow. We wanted a fundraiser that would showcase the community and we did envision bringing thousands of participants to Kennett Square. The other very important part was bringing together groups that could work together for one event.”

As anyone who has participated in or attended one of the first 24 events knows, the Kennett Run is a family-friendly event that offers something for all ages and abilities, ranging from a one-mile fun walk to a 10K PowerRun and everything in between. Following the run, there is a party in the park for the runners and their family and friends, with food, drinks, and entertainment.

Perna called himself the typical Kennett Run participant in that he has taken part in all the races, whether it’s the walk, 5K, the 10K, or the PoweRun.

Ringler-Friedrich said that one of the goals for the organization is to expand the participation in the event by local residents, and one way to do that is by emphasizing that the race is for anyone of any ability level.

“We would like to grow this race by involving our community more,” she said. “We’ve formed committees in the school district to involve the students and families in all ways.”

Genereux added that the event is still a good one for competitive runners, too.

“They love this race because we have a good course and a nice purse,” he said.

Perna said that many of the people who were involved in the event two decades ago are still involved. The longtime members help bring along the next generation of organizers. Brian Roberts is a member of the Kennett Rotary and will assume a leadership position with the Kennett Run in 2015. It’s a challenge that he’s looking forward to.

“I’m excited about it. There are a lot of good people who have been together for a number of years who will make it a success,” he said.

Organizers are already looking forward to the 25th annual Kennett Run, which will take place on Saturday, May 17, 2014. Genereux and Ringler-Friedrich have each agreed to serve a third year in their respective roles. They had the honor of unveiling the T-shirt colors for 2014—what Ringler-Friedrich called “power blue” for ladies and “safety orange” for gentlemen.

Kennett Run officials expressed their gratitude toward all the municipal leaders, police officers, firefighters, and fire police who help make the event a safe, orderly experience for participants and spectators. The race goes through three municipalities—Kennett Square, East Marlborough, and Kennett Township—and Genereux said that they’ve always been supportive.

The cooperation and collaboration—between municipalities, between service organizations, between sponsors and grant recipients—typify the spirit of the Kennett Run.

“It’s really about the charity and bringing the community closer together,” Genereux said.