Youngsters enjoyed the rides on the barrel train. 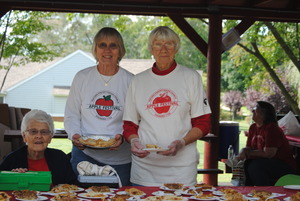 “It’s such a lovely day today,” said Jackie Slauch, a member of the Oxford Presbyterian Women, the group that organized this year’s Apple Festival.

Church member Lorraine Holton explained that the Apple Festival’s origins can be traced to 1989, when the Oxford Presbyterian Women were trying to restock the kitchen following the fire that hit the church.

The festival was highlighted by plenty of food, games for children, and several dozen vendors who sold their arts and crafts at the Oxford Memorial Park. All Four Him, a local group, performed for nearly an hour and a half.

The church usually picks a beneficiary for the proceeds of the Apple Festival. This year, the church decided to use the funds that are raised for the church’s various ministry efforts throughout the year.

A silent auction of approximately 40 items that were donated by church members or businesses in the community helped boost proceeds from the event.