The J.G. West barn in Kemblesville is being dismantled by a company that will re-use the lumber.

Last week, time finally ran out for the J.G. West barn in Kemblesville.

The huge bank barn, built in the early 1800s, began to come down, piece by piece, on Sept. 12. A crew from the Barnyard Boys, a company based in Peach Bottom that recycles lumber from old barns, began by stripping the aluminum siding from one wall and peeling up the metal roofing. In  about a week and a half, there will be nothing left at the site next to the Franklin Township Building except the concrete silo and the earth ramp that led up to where the barn door used to be. 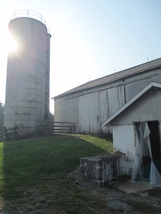 For a loyal group of preservationists, the demolition is a frustrating end to an ongoing dispute with the Franklin Township Board of Supervisors. Heated public meetings, beginning more than a year ago, culminated in a lawsuit that sought to stop the demolition of the barn. Dolores Hughes, who serves as chairman of the Franklin Township Historical Commission, filed the suit in Chester County's Court of Common Pleas on Feb. 13.

Supervisors Paul Overton and Nan Latimer had voted to preserve the historic building -- or at least stabilize it until renovations could be undertaken. Private donors had pledged about $11,000 to replace the roof and prevent further water damage inside. The barn is listed on the Pennsylvania Register of Historic Places.  However, Board of Supervisors chairman John Auerbach, along with supervisors Eric Brindle and Penelope Schenk, voted for demolition.

The barn, which sits next to the township building in the Kemblesville Historic District, was built by John Davis, who sold it to George Kimble in 1817. Dr. J.G. West bought the property in 1867 and owned it until his death in 1917. The building has been in the care of the township for at least 20 years, during which time it has been used for storage. It has been clad in metal siding which has helped preserve the wood. The Historic Architectural Review Board (HARB) admitted that there is some roof damage that has allowed water to damage some floor boards of the barn. Two professional structural evaluations concluded that the barn is fundamentally sound.

Overton believed the barn could be refurbished and used as a township office, or rented out as 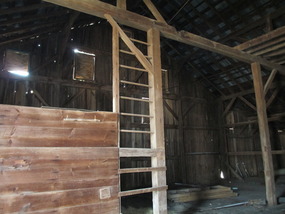 The lawsuit said that the township intends to use the slab of the building as a salt-mixing pad, and Hughes stated that the value of her home, which sits less than a mile from the site, will be reduced because of the unsightly proposed use.

The lawsuit also pointed out that the township is required to consult with the Pennsylvania Historic Preservation Board before altering anything in a historic district. The suit asked the court to stay the demolition of the barn until the board complies with the requirement.

Township resident Lou Mandich has been a vocal proponent of preserving the barn. In a letter sent to the supervisors last week, Mandich wrote, "Other townships and private owners throughout Chester County -- including myself -- have made adaptive re-use of the vast space found in most barns. … The Historical Commission and the HARB have not been looking backward, but forward. The five acres surrounding the barn property are perfect for a community gathering place -- it is indeed the 'Town Square' of Kemblesville. The fact that no one has stepped forward to take over the barn in no way diminishes its potential for future use. ... Please reconsider." 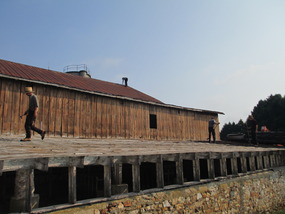 In an e-mail sent to those who fought to save the barn, former supervisor Bill Skalish wrote, "Thank you for all your efforts to help save such an important piece of our township's heritage. It's unfortunate that a majority of the board of supervisors did not have the vision, courage or leadership skills to do the right thing for the community, and allow volunteers to preserve the historic barn for future generations."

During a phone interview in March, Dolores Hughes said she was shocked that the board voted for demolition of the barn after a panel of experts presented clear evidence that it was worth saving.

"A group of people who were there -- all private citizens -- got together money to apply for a grant for the other part of the money," she said. "That way, we could at least patch the roof and then be able to raise more funds to stabilize the barn. 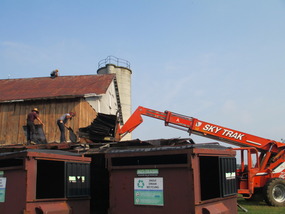 village is named after him," Hughes said. "When you have a building like this, once it's gone, it's gone."

Supervisor John Auerbach, in a statement to the press on Sept. 12, wrote that the board of supervisors provided a four-month waiting period to allow the HARB and others to present their case for rehabilitation of the barn. Auerbach felt that the barn was in poor condition, and that "the building has reached the tipping point where further deterioration will make the building significantly more dangerous and degrade the salvage value."

Auerbach said that the township owns the building but has not used it. "The vision is to rebuild/reconfigure the barn so that it will function as township office and community center," he wrote. "Although no specific cost was pursed from a contractor, general discussions talked about $700,000. With contingencies, the cost could easily reach $1 million for a building of this size, configured to comply with building codes for routine habitation by township personnel and group activities."

Auerbach wrote that fundraising ideas put forward by community members, in his opinion, would 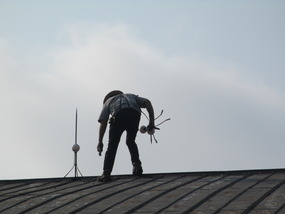 not cover the cost of rehabilitating the barn. As for direct monetary donations, Auerbach wrote, "One of the key elements in this process is for the people managing the fundraising activities to make some contribution first to establish their good faith, support for the project, and set an example. After much discussion, no one in attendance [at the meeting] indicated that they would make a donation. The room was silent."

Auerbach noted that grants were a possible source of funding, "but require a matching amount from the township. The grant values that have been put forward are small, $10,000 to $25,000. Additionally, our poor economic conditions indicate that grants for building rehabilitation will be scarce."

Noting that last year, voters turned down two referendums to increase taxes for open space, Auerbach wrote, "I do not believe the barn project and open space are near the same level of desirability by voters, with the barn project having a much lower priority."

The Barnyard Boys paid the township $1,000 to salvage the barn, and will make money by recycling the aluminum siding, and reselling and reusing the timbers from the structure. Bill Thompson has signed on to recover the stones from the foundation for reuse. 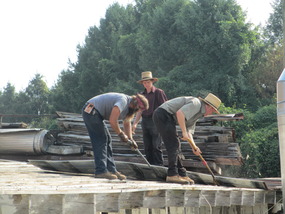 The lawsuit against the township is ongoing, Auerbach said, "but our attorney reviewed the lawsuit and found that it does not have a stay that prevents us from going ahead with demolition."

The barn site will eventually hold a paved pad, Auerbach said, where salt and anti-skid materials will be stored for use on township roads during winter weather. "Right now, we have to do the mixing of that material in the middle of the parking lot," he said. "Eventually, I would imagine having some shed storage for those materials" on the pad site, he added.

Supervisor Nan Latimer, in an e-mailed statement on Sept. 13, wrote, "I continue to be disappointed that supervisors Brindle, Schenk and Auerbach did not accept the offer by Franklin residents to donate and raise private funds to stabilize the barn. The use of taxpayer dollars to tear down the barn, instead of using no tax dollars to fix it, is in conflict with the platform on which Schenk and Auerbach were elected. I also regret that these supervisors turned a blind eye to the township ordinance concerning demolition in the Historic District.

"I would like to recognize the hard work and broadmindedness of the Franklin HARB and Historical Commission members who worked hard to educate the Franklin supervisors opposed to preserving the barn, and also sought to find an alternative use for the barn. These individuals were publicly recognized for their efforts by the Chester County Historic Preservation Network, which presented them with its Grace Under Fire Award."

Paul Lagasse of the HARB had long been in favor of saving the barn. On Sept. 13, he wrote to the Chester County Press, saying, "The loss of the J.G. West barn, the only sizable barn in the township that the Board of Supervisors was in a position to protect, is regrettable. It is not as though the supervisors were without options: I was one of those who, back in June, 2012, outlined for them a plan to stabilize the barn without resorting to the use of Franklin Township taxpayer funds. The failure to at least try this option has led to a larger failure, the loss of what could have been a valuable community resource once it had been given new life as a township meeting hall, local museum, or the like. It is a loss that might have been prevented had a majority of the supervisors showed more patience, flexibility, and imagination.

"It is not just a barn that is being demolished: Part of the historical fabric that the Kemblesville Historic District was created by the township to protect is also being destroyed," Lagasse continued. "More than any other structure, the J.G. West barn made it clear how closely intertwined agriculture once was with the small commercial village of Kemblesville.

As the metal siding is being removed in preparation for the tearing apart of the barn, we can see -- for too brief a time -- the roughsawn beauty of its stout wooden sides once again, and see all too clearly just what we have taken from our children and grandchildren. I wish it were otherwise."