The Kennett Area Y celebrated the results of a $3.25 million expansion with a grand reopening ceremony on Sept. 6. 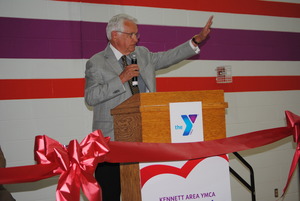 Denise Day, the president and CEO of the YMCA of the Brandywine Valley, spent seven years as the executive director of the Kennett Area Y. She said that the expansion has long been a goal as the Kennett Y attempted to accommodate the growing number of members at the flourishing facility.

"We started dreaming about this a long time ago," Day said. "This has been a long time in coming."

The expansion, which includes a warm-water pool, a family activity center, a half-gym and basketball court, a wellness studio, an arts studio with a pottery kiln, and space reserved exclusively for individuals who are new to exercise, increased the facility by 25 percent. The new additions were open to the community during a weekend of celebration on Sept. 7 and Sept. 8.

"We want the whole community to discover the new Kennett Y," said Doug Nakashima, its 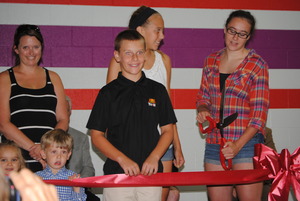 executive director. "The Y is the heart of our Kennett community. With these exciting renovations and improvements, we will have the space and resources to serve even more children and families in our community."

Day said that the fact that the Kennett Y stayed open during the expansion project allowed members to see the progress that was being made at each step. She thanked the members for persevering through the long months of construction. 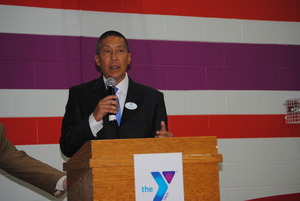 "Thanks to the leadership of Tom Musser, the vision of our Board of Advisors and the generous support of our donors, the new Kennett Y is a reality," Nakashima said. "We're truly blessed to have individuals, companies, and foundations that believe in what the YMCA does in the community. They see the big picture of what the Y can do."

Musser led the initial capital campaign that resulted in the construction of the Kennett Area Y.

The Kennett Area Y opened on Race Street in 1998 and grew steadily into a bustling home to more than 11,000 children and adults.

"This Y has had a special part in my life," Musser said, reminiscing about the early days of the Kennett Y, when they rented space for exercise rooms and pools. "When I look back on that, I am amazed."

Day talked about the growing importance of the Y in the Kennett community. She called it "the heart of the community" and said that it was "like a second home" for many of the families in the Kennett Square area.

Alexis Barsamian, Board Chair of the Kennett Area Y, said, "Now that the expansion is complete, we have a much greater capacity to serve the young people and families in the community. We appreciate everybody's support."

Nakashima and Day both thanked the staff of the YMCA for helping members as the expansion project progressed. Nakashima said that the entire community made the expansion possible.

"We're looking forward to the future of our Y," Nakashima said. "It takes a community to do what has been done. It's wonderful."