The Kennett squad comes onto the field.

The Kennett football team is coming off the most successful season in its short history so there was plenty of excitement as the first game of the 2013 season approached. Add to that the fact that the first home game of the new season would also be Kennett’s first time hosting a night game in its stadium and that excitement increased exponentially. 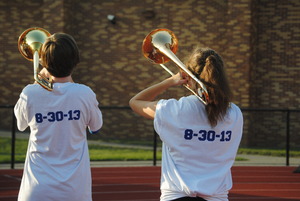 Signs of the excitement were everywhere. The stands filled up two hours before the game. Fans and students wore shirts with “8-30-13” on the back to mark the occasion. The players warmed up with a little extra zeal, eager to get the new season off to a good start.

Everyone was excited about the debut of the new stadium lights, which were paid through a successful grass-roots fundraising campaign that secured more than $225,000.

“It’s a great feeling to host a home game under the lights,” said Kennett High School assistant principal Jeff Thomas. “It’s great for the community, great for the town, and great for the school.” 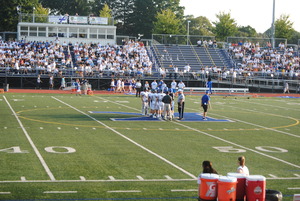 Tomasetti. “The entire community pulled together to get the money for the lights.”

The superintendent also noted that the Kennett vs. Avon Grove game earned the NBC 10 Game of the Week honors because more than 55,000 votes were cast to earn the designation.

“This is absolutely exciting,” said Leon Spencer, a longtime Kennett Square public servant who also serves as the announcer for Kennett sports teams. “It’s a highlight in the life of the community. I always said that this would happen eventually.”

The electricity peaked at just a few minutes after 7 p.m. when the game between Kennett and Avon Grove finally got underway.

Kennett got the ball first and one of the major storylines of the game was soon established: The Blue Demons’ could generate some big plays, but whenever there was an opportunity something—a penalty, a fumble, or a bad bounce—would stymie the drive.

Kick returner Sean Middleton had a nice return on the opening kickoff, but it was negated by a holding penalty. Quarterback Jordan Jones bolted for a 42-yard gain that moved the ball all the way to the 20 of Avon Grove. But the next three plays yielded one yard and the Blue Demons were forced to attempt a long field goal. The attempt was unsuccessful and the game remained scoreless. 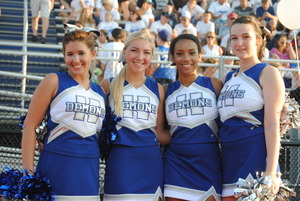 Avon Grove took over at the 20 and quarterback Tanner Peck engineered a 15-play drive that moved the ball deep into Kennett territory. Peck connected with receiver Beau Kush three times to help move the chains. But Kennett’s defense rose to the occasion on fourth and short when linebacker Kyle Werner stopped running back Jake Parola before he could pick up a first down.

With the Blue Demons starting at their own 23, running back Noah Turner did a nice job of finding running room on a sweep. He gained 18 yards. Jones then threw a pass to Brett Rose, who turned the play into a 45-yard gain. Two plays later, Jones again found Rose, this time on a 15-yard screen play for the first score of the game. The extra point was no good so the score remained 6-0.

Avon Grove struck back late in the second quarter when Peck threw a 12-yard touchdown to Beau Kush. The extra point by Anthony Scarpato gave Avon Grove the 7-6 lead.

At halftime, the key contributors to the Demon Lights Committee, the group that spearheaded the fundraising efforts to pay for the stadium lights, were brought onto the field and honored for their efforts.

The second half of the game was an extended battle for field position. A 30-yard pass play from 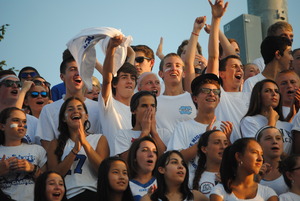 Peck to Kush moved Avon Grove into Kennett territory. The drive sputtered but the Red Devils were able to punt and pin Kennett back at their own 12. Kennett was able to move the chains twice before having to punt the ball back to Avon Grove. As the game moved from the third to the fourth quarter, Avon Grove held on to the one-point lead and also kept the advantage in the battle for field position. The Red Devils’ ground game, which featured carries by Jake Parola and Taylor Kim, was effective enough to keep Kennett’s offense off the field.

Finally, with 2:04 left to play, Kennett got the ball back for one final chance to put together a scoring drive. On second down, Jones completed a pass to Rose. He reached the 23 before he was hit and the ball was jarred away. Defensive end Mike Tipton recovered the ball for Avon Grove. 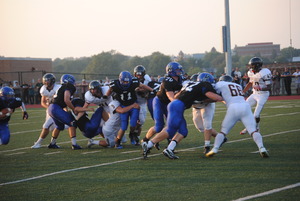 Kennett had already used all its timeouts so all Avon Grove had to do was run out the clock to seal the victory.

Avon Grove Head Coach Doug Langley said that his team worked very hard in the off-season to build on a 2012 season in which the squad won just one game.

“This is a huge boost for us,” Langley said. “We told our players that the team that plays the hardest, the longest, wins the game.”

Peck, a senior, completed 13 passes for 160 yards with most of them being targeted toward Kush. The wide receiver hauled in nine catches for 125 yards.

“Whoever plays the hardest, the longest, wins games,” Peck said, echoing his coach’s sentiments. “Our defense really stepped up tonight. We knew we had to take care of our responsibilities. The offensive line was huge for us tonight. They deserve all the glory. It was a huge team effort.”

Peck credited Kush with the success that the tandem had against Kennett. 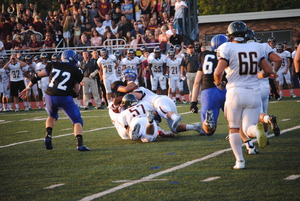 “He’s a heck of a player,” Peck said. “He can break down a defense. He’s quick and he can shake-and-bake on defenders.”

“What breaks my heart the most is that all these fans came out for this wonderful event and then we don’t play better than that. I feel horrible about it. At 6 o’clock, this place was packed. We needed to win the game and we didn’t.”

Kennett fumbled the ball at least six times and they were fortunate to lose possession on just one of them.

“Every time we had a drive going, whenever we had an opportunity, we would make a mistake,” 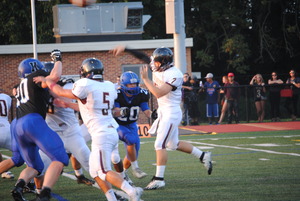 he said. “We simply didn’t play well enough to win. When you hold a team to seven points, you’ve played good enough defensively to win the game. But we lost the field position battle the whole second half.”

Green, who has transformed Kennett into a team that is competitive in the powerful Ches-Mont League, said that his team will need to correct the mistakes that it made against Avon Grove if it is going to win against West Chester East on Sept. 6. Avon Grove, meanwhile, takes on Great Valley on Friday.

Although football coaches spend countless hours developing game plans and strategies and the players spend an equal amount of time practicing to carry out those game plans, football is not a sport that abides by a script. Kennett did not win its first home game under the lights, but let the record show that after decades of day baseball games, the first time the lights were turned on at Wrigley Field the Chicago Cubs were rained out in the first night game against the Philadelphia Phillies.

A 7-6 loss did not diminish the long-term significance of the stadium lights and the opportunities that they will give to the students for years to come.

Erica Angeline, a senior, said that she and the other members of the cheerleading squad were excited about being able to perform during home games at night.

“It’s going to be our last year to do this so it’s really cool,” she said.

Carly Dargitz agreed, saying that the seniors, in particular, had waited a long time for the amazing experience of performing under the bright, Friday night lights. 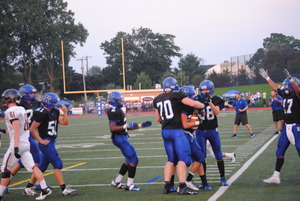 This is Samantha Bennett’s first season on Kennett’s cheerleading squad. She previously cheered for a Rising Sun High School team that played its home games at night. She’s glad that she can now do the same thing for Kennett.

Mya Webb said that liked being part of the excitement that comes with nighttime games.

Members of the band were also excited about performing under the lights. “It’s completely new,” said Zach Shen. He noted that before the lights were installed the band would often have to practice in the dark. Now, the band will be ready for all their performances, including those under the lights at other stadiums.

Kennett High School assistant principal Raymond Fernandez said that he could sense the students’ excitement leading up to the first game under the lights.

“Having the lights for a night game after so many years is really icing on the cake,” Fernandez said. “This is history in the making.”

One of the notable people who turned out for the first night game was Rudy Karkosak, the 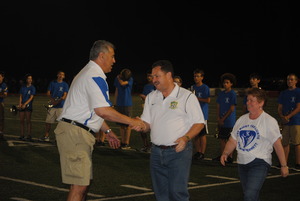 former superintendent of Kennett Consolidated School District. He supported starting the football program and building a first-class stadium for the Kennett students. He recalled that when the football team debuted, people started asking when a stadium could be built. When the stadium was completed, people wondered when the lights would come so that games could be played at night.

Now, everything is in place. The stadium experience is complete.

High school principal Dr. Michael Barber said, “I think it’s awesome for our students and school community. So many people came together to make this happen. This is about our community coming together on Friday night to support the kids.”

Tomasetti said that he wasn’t surprised that the community rallied to support the effort to put lights up at the stadium.

“Nothing surprises me about Kennett,” said Tomasetti. “It’s an amazing community. This was a great night for Kennett football."