Garo Yepremian was born in Lanarca, Cyprus to Armenian parents in 1944, and when he was a child growing up in Cyprus, his family had no indoor plumbing and kept warm in winter by burning olive pits.

On Tuesday, Aug. 20, Yepremian met the President of the United States at the White House.

On the 40th anniversary of the Dolphins' celebrated 17-0 season, for whom Yepremian served as the team's kicker, the team was honored in ceremonies at the White House. Yepremian was one of 31 players who stood on a three-level riser, an occasion that had been scheduled to be held in 1973, but was postponed by the Nixon Administration, which at the time was embroiled in the Watergate scandal.

For the next four decades, the White House had thought of ways to honor the team, which won the 1973 Super Bowl with a 14-7 victory over the Washington Redskins. Plans began, sputtered, and began again, only to be postponed. Two weeks ago, a representative from the White House called the Yepremian home in Avondale, and asked him if he'd like to be a guest of the President at the White House.

"I said to the representative, 'Is that a question or a statement?'" Yepremian said. "I said, 'Are you kidding?  I would walk there.' When the Office of the President calls, it doesn't matter what your political beliefs are, it's the White House, the symbol of the freest country in the world." 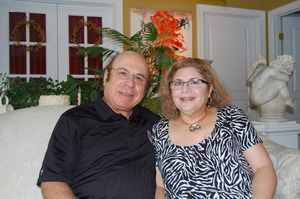 On Aug. 19, Yepremian and his wife Maritza arrived in Washington, D.C. by Amtrak from Wilmington. That evening, they had dinner with former teammates and their wives at the Westin Hotel. The next morning, however, the Yepremians found out that Maritza had not been cleared to be in attendance at the ceremony. She spotted the wife of Otto Stowe, a back-up wide receiver on the '72 Dolphins, and together, they saw a few of the players' wives board the team bus for the White House. They were not among them.

"Here, my husband is in the White House being honored, and I can't get in," Maritza said. "We were excited for them, but when we saw a few of the wives had boarded the bus, we were very disappointed that we were not able to be there with them."

The team bus arrived at the White House at 11 a.m. For Yepremian, walking into the White House was awe-inspiring, but also touched with sadness; his wife of 42 years was not coming. To pass the time before the ceremony, Yepremian visited eight rooms in the White House, which were filed with portraits of the nation's first presidents, as well as gifts of china from around the world.

Eventually, the team, led by Head Coach Don Shula, were ushered to the Blue Room. President Obama entered a room crowded with team members and well-wishers, and personally greeted every player. When he reached Yepremian, he asked the former kicker, "How's your passing?" a direct reference to an errant throw Yepremian made during the '73 Super Bowl that was picked off by Redskins' safety Mike Bass and run for Washington's only touchdown of the game.

"Sir, I'm the highest-rated quarterback in the history of the Super Bowl," Yepremian responded.

"You can still throw a football?" Obama asked. Yepremian said that he could.

Immediately, someone tossed a ceremonial football to Yepremian. Looking up, he saw Obama going out for a pass. Yepremian turned his back, tossed the ball behind his back, and to his surprise, he saw Obama leap high in the air and catch the ball.

"Here I am, an immigrant who arrived in the United States 47 years ago, and I made the President jump," Yepremian said.

In the days prior to the ceremony, three of Yepremian's teammates from the team - Jim Langer, Manny Fernandez and Bob Kuchenberg - publicly voiced their opposition to the policies of the Obama administration, and did not attend the event.

"It's unfortunate that some people put politics above the highest honor you can receive," Yepremian said. "How many opportunities do you have to be in the White House?  When you go to the White House, you put politics aside. These guys were born in this country. They should have been proud to be there."

Meanwhile, Maritza, who is recovering from thyroid surgery two weeks ago, began to walk in the direction of the White House, more than a mile from the hotel. Once she arrived, she pleaded her case to secret service officers. One of them sympathized with her; his wife had just had a similar operation. Once inside the White House, she got through additional security, and began to run up a long flight of steps. Her husband had just taken his position in the half-circle greeting line, waiting for the President. As Obama walked into the Blue Room, Yepremian received a text message. It was one of his sons. "Mom is in the White House," the message read. Maritza arrived in the Blue Room, just as Obama was about to begin the ceremony. There, she saw her husband shake hands with the President of the United States.

In addition to being a fine artist, and the chairman of the Garo Yepremian Foundation for Brain Tumor Research, Yepremian gives motivational speeches to groups and organizations throughout the country, where he shares the story of his rise from being an immigrant from Cyprus to playing a key role on  the most successful single-season team in professional sports in the last 50 years.

"This moment will be the highlight of the story I will tell from now on," he said.  "After family, this is the highest moment of my life. I came to this country with a dream to breathe the free air that America offers. Once you come to America and appreciate its laws and appreciate what it stands for, you have a special feeling for this country."

presents "A Night to Remember"

Space is limited. For more information and reservations, call 610-268-2299, or visit www.yepremian.org.