The National champions return to Kennett Square as Kings The KAU Kings received a warm welcome in Kennett Square after making it all the way to the World Series championship game.

Before the Eastern Regional champion KAU Kings boarded their bus for the ride to Bangor, Maine to compete in the Little League Senior Division World Series, manager Eric Duerr was asked what his expectations were. He said, “Our highest expectation is that we’re participating.”

Defying their manager’s expectations, the Kings advanced to the World Series championship game. Despite losing to Panama, 2-1, for the world title, the Kennett Square 16U team earned a title that eluded every other team in the United States: National Champion. And those same National Champions earned one more reward for their trip to the World Series: a parade through Kennett Square and a welcome home celebration at the KAU Sinton Field after their 16-hour bus ride home from Bangor.

The chance to “win it all” came down to the bottom of the 7th inning of the championship game. 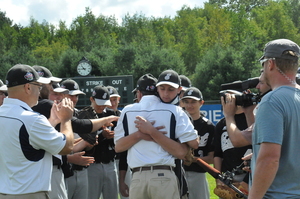 Cheered on by what Kings’ Coach Mike Pechin called  “an embarrassingly pro-KAU crowd” of both international and American fans, the USA East squad had runners on second and third with two out while trailing just 2-1 to Chitre. Jake Freeman had busted down the first base line to beat a short-armed throw from Panama third baseman Edgardo Sandoval and Eric Takhousian followed with a single up the middle. Dan Garver sacrificed to move Freeman to third and Takoushain to second.  With one out, Panama pitcher Javier Garcia—he of the 91-mile-per-hour fastball  and 67-mile-per-hour sweeping curveball--struck out Chris Tucker on four pitches and battled Drew Jarmuz into hitting three straight foul balls, the third of which was caught by Chitre first baseman Carlos Espinoza to end the game. As Garcia reportedly signed a contract with the New York Mets, Pechin said, “We got beat by a 16-year-old with major league quality stuff.”

Repeatedly throughout the tournament, Duerr reminded the players  “It’s not only about the game and about being at the World Series. It’s about the sacrifices their families have made to be here. It’s about the thousands of people in Kennett Square, Pennsylvania, and across the country watching them—especially the younger players at KAU. They need to realize what it means for other people to see them play in the World Series and to demonstrate behavior and sportsmanship that makes them worthy to be here.”

Duerr said that through “tweets,” texts, and e-mails on the bus ride back to Kennett Square, the team learned of the growing  welcome-home reception. The team bus—expected to arrive around 6 p.m.—was nearly two hours behind its ETA. “As the ride grew longer, the delays had the boys anxious that they would arrive to find a couple dozen people,” Duerr said. “When we hit Kennett Square and the fire and police departments pulled out in front of the bus, we realized we were in for something very special. We did not imagine it would be what it turned out to be,” Duerr said. “We thought we would get off the bus, shake hands, and go home."”
As the sirens squealed and horns blared from nearly a dozen emergency vehicles, hundreds of fans lined State Street from the YMCA down to Route 82. The players got off the bus and walked several blocks, shaking hands and high-fiving the fans. And when the bus made its way to the place where many of the players’ baseball careers started—Leslie Road—they were greeted by nearly 300 more people. Coaches, parents, girlfriends, and neighbors applauded as the players walked down the main stairs to the field. Lined along the stairs were many younger KAUers, chanting “KAU-USA” and reaching out to slap hands and high five.

The players entered the field to the theme from “Rocky” to begin a ceremony at home plate.

Duerr told the crowd he remembered many of the players as six-year-olds. “This has been a 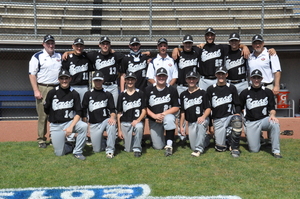 dream come true, I think, for everyone involved, either on or off the field,” he said. He added that many of the people he spoke with did not believe that the team came from a small town. “Are you sure you didn’t get them from other places?” Duerr said he was asked. “I told them, nope, they’re all home grown, every one of them.”

While winning games was the eventual U.S. Champions’  top priority, learning about other cultures was a byproduct of the trip to Bangor. Players asked one another about their towns, what the school year was like, how they traveled to the World Series. Twitter names were exchanged and promises made to keep in touch. In fact, about three hours after the championship game ended, the Senior Leaguers from Kennett Square were playing Wiffle ball in the hotel courtyard with their new friends from Chicago and Italy. Continuing a World Series tradition of exchanging “pins” with all participating teams, the KAU 16s did just that. And when they had no more pins—inscribed “Mushroom Capital of the World” and donated by Bove Jewelers of Kennett Square—they traded clothes with members of the other teams from around the world and across the U.S.

Resiliency was what helped guide the KAU squad from a district title to the sectional, to a state championship, and then to an Eastern Regional championship and the ultimate: a trip to the World Series. Personal circumstances could have been distractions. Tucker Reese commuted five hours to and from Sectionals to be with his mother in the final days of her long battle with cancer. Jarmuz dealt with the death of his grandfather during Regionals. Jake Freeman’s grandmother is in hospice fighting cancer. And Eric Duerr suffered a concussion during a violent collision at home plate in a pool play game with Panama. This all affected the team at the World Series. Pechin said, “This team was walking a thin emotional line and even the slightest little thing might make it go ‘boom.’” 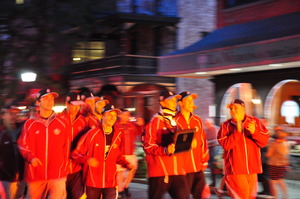 “Just working hard, hanging around one another, enjoying each other, developing friendships, and experiencing this unbelievable time together has helped this team cope with much more than a group of boys this age should be expected to,” Duerr said.

Pechin said that in an emotional meeting after the championship game, he challenged the boys. “Sometimes kids at this age can be very self-centered. I told them this is not just about them. Many good and decent human beings—mothers, fathers, families, friends—gave up a lot to be here and to get you here,” reminding them not only of the finances involved for such a trip, but of the many hours spent at games and on the practice fields. “I told them I expected them to pay everyone back when they have kids of their own. Maybe some of these boys have learned to care about other people and not just about themselves.”

The U.S. Champions’ manager concluded that “the welcome home celebration helped convey what the coaches had only been able to verbalize to the players:  they were not playing for the Kings, they were playing for Kennett Square and the many folks at home who had come to appreciate that baseball is community-based. For a group of boys to band together from a small town and play all the way to the biggest stage of teen baseball, well, the reception put it all in perspective.”