In the emergency room, doctors have little time to treat an overdose In the emergency room, Dr. Alex Fernandez sees the result of what heroin can do.

When the doors snap open and someone arrives on a gurney, pale and unconcious, Fernandez and his team instantly react the way they've been trained. Since coming to Jennersville Regional Hospital in April, Fernandez has seen people enter the hospital in a critical state. The heroin problem in southern Chester County, he said, is very real. 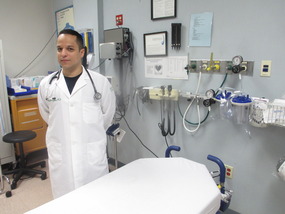 Fernandez did his residency at Thomas Jefferson University Hospital in Philadelphia, so he's all too familiar with the damage done by both heroin and crystal meth. In Chester County, he said, it's usually people in their late teens to their early 30s who come through his door. Some are on a stretcher. Some walk in, realizing they need help with their addiction. Either way, Fernandez knows what they're going through.

"Heroin is an opiate," he explained during an interview at the hospital last month. "It affects the area of the brain that perceives pleasure. It's in powder form, basically. Pure heroin will be white. There's something called black tar that's like asphalt that hasn't dried yet. That's a very impure form of it. You can inject it, you can snort it, smoke it as well.

"It gives you this instant sense of euphoria," he said. "It's a false sense of well-being. Unfortunately, because it's an opiate, it can cause severe respiratory depression, where the drug is fooling your brain into believing that it doesn't have to have a respiratory drive.

"There have been studies done with rats in which they were offered water, food, a fertile mate, but the rats would rather have the drug," Fernandez said. "I've had patients tell me they've been through several detox facilities, and each time they have relapsed. That's because the urge to use the drug is so great. Sometimes patients will basically give up the urge for, let's say, eating. They would rather have the drug."

In raw numbers, there were four cases of heroin poisoning in the Jennersville Hospital emergency unit in 2009. There were five in 2010, 11 cases in 2011, and 16 cases in 2012. As of May 31 of this year, there have been seven people treated. That indicates a big problem, because Jennersville winds up seeing only some of the region's possible overdoses. Some patients are taken elsewhere, depending on how far away they are from Jennersville. And that number doesn't count the people who died before ever reaching the hospital.

Drugs are tied to the area's crime rate, because addicts will first sell their belongings to get money for drugs, then turn to stealing and burglary, then sell their bodies for sex to get drug money. Sharing needles and selling sex leads to HIV and hepatitis infections. Families are ripped apart as the addict pursues the drug at all costs, getting very good at lying along the way.

In the first few minutes after a patient arrives in the emergency room, Fernandez said, "if you suspect a heroin overdose, you go through their belongings, trying to find out what it is. They have very ingenious ways of hiding drugs. A pack of cigarettes, for instance. There's that foil packet that you take off, but it can separate from the box. You put the heroin in the wax paper, make it flat and hide it behind that, so when you look at it, it looks like just a pack of cigarettes."

And that permission doesn't happen all the time.

"I'm trying to save their lives, I'm not there to judge," Fernandez said. "I'm there to help them get the appropriate channels to get help. … I have yet to meet a patient who is very open [about their addiction]. You can tell there's a certain sense of guilt or shame. I've had patients who are very educated, had wonderful careers, and lost everything. When they think back, what's the one thing that will make their emotional pain go away? It's to do more heroin, so they don't have to feel the pain. It's a very vicious cycle."

The crux of emergency treatment is in the timing, Fernandez said.

Administering a treatment called Narcan blocks the brain's opiate receptors and usually snaps someone out of symptoms of an overdose. But it only helps if given in time.

"If somebody isn't found in a relatively quick fashion, not breathing can lead to cardiac arrest," he said. "Basically, you're starving the body of oxygen. Now you have cardiac injury. Even if you get spontaneous breathing back, somebody could have a brain injury. Most often, that's non-reversible."

Another question he faces is what drug a patient has taken, and in what combination with other drugs or alcohol. A person's age, their weight, and their history of prior drug use are all part of the critical equation in the emergency room.

"The body develops a tolerance, so the person winds up using the drug in greater quantities as well as much more often," Fernandez said. "Everybody's body is different. So what happens is that one person could overdose on two bags of heroin, or I've had patients come in and say they're using 12 to 15 bags a day. They don't have the euphoric feeling, so they do this huge amount that inevitably can kill them."

Even if someone is stabilized with Narcan, they must be observed carefully because they could suddenly feel fine and check themselves out of the hospital against medical advice. When the Narcan wears off, the person could be right back into the overdose symptoms.

A lot of the growth of heroin use may be attributable to the fact that it can be snorted or smoked. People first experimenting with heroin are usually wary of using needles.

"There's a lack of education," Fernandez said. "Peer pressure's involved, but I've had many patients say to me, 'I would never have done this drug, but I was told that if you do it once, you don't get addicted right away.' Unfortunately, heroin is one of those drugs that, once you try it, there's almost an automatic addiction. It's not easy to stop."

Repeated use leads to chasing the initial high, so injection usually follows. That damages blood vessels, particularly if the drug has been mixed with fillers such as talcum powder, or combined with things like rat poison, Fernandez said. Blood vessels can become septic due to the foreign particles.

"I've seen patients with horrendous skin infections and abcesses," he said. "They have to have surgical intervention to clean them out. I've had patients who can't find their veins anymore, so they do something called skin popping - putting the needle anywhere you can get it into the skin, hoping it gets into the vasculature."

Packages of heroin are usually stamped with names to signify a kind of dealer's brand, Fernandez explained. One type, labeled Rocky, comes out of Philadelphia, "and it's so impure, it can cause what we term flash pulmonary edema," Fernandez said. "What that means is you have fluid from your own body that's shifted into your lungs. Essentially, it's as if you're drowning in your own fluids. Very, very difficult thing to treat. That person would be put on a ventilator - that's an extremely high level of intensive care."

Part of the insidious nature of heroin is the way it wraps itself around a person's life.

"They can get narcotic bowel syndrome," Fernandez said. "It occurs in somebody who's addicted to any type of opiate. When they start to withdraw, they get belly pain. The pain is severe, like appendicitis. Nobody wants to be in pain. So they take more drugs to get rid of the pain. The more you take, the better you feel.

"The sad story is women who are pregnant and continuing to use heroin," he said. "The addiction is so strong that it overrides their thinking. They don't want to take it, but they can't help it. The baby is born going through withdrawal."

Withdrawal can be instantly excruciating, occurring sometimes within hours of stopping the drug. The initial wave of vomiting, severe diarrhea and cramping can be enough to convince addicts to get high again to avoid the consequences of detox.

So why is heroin so prevalent, and making inroads here in Chester County?

"It's become so accessible, and more people are experimenting with it," Fernandez said. "I've had patients who mix drugs, like cocaine and heroin, together. It's very easy to obtain, there's a huge supply of it, and it's getting more and more into schools. You can buy a cheap crack rock for five or ten bucks on the street. A couple of packets of cocaine may cost you $20. … Not here, but I've read reports that a third-grader was caught selling heroin.

"With teenagers, when I've spoken to them at their bedside and asked why they're using it, it relates to peer pressure," Fernandez said. "You do get the unfortunate one every now and then who says, 'Well I've seen my parents do it, so I did it.'

"It's an epidemic, and it's across the whole spectrum of socioeconomic status. It doesn't matter - race, religion, background, whether you're financially stable or not. It's everywhere."

As part of his residency in Philadelphia, Fernandez spoke to school students about the dangers of drug abuse. He also presented a program to nurses at a Pottstown area hospital to educate them about the symptoms and treatments for overdoses. "It was well received, and initially there were about 20 people who showed up," he said. "I was asked to do it again, and the next time I had about 80 people. There were staff members who brought their teens with them. Some of the teens may have been caught with, let's say, marijuana. The parents wanted to jump on this right away."

Fernandez said he didn't hold back. "I had photos of some of the infections you can get from needle use. You could hear 'ooh, ahh,' in the audience," he said. "Afterwards, I had two or three teenagers come up to me and say, 'Thank you, because I did not know that could happen, and I will never touch that stuff.' I hope that they never do. One kid stood up, looked at his mom and said, 'I'm going to give you everything I have hidden. I don't want to do this anymore.' So I felt good about that."

If he could reach a teen who's thinking of trying heroin, Fernandez knew right away what he would say.

"I'd say first that this is not a good idea," he said. "I'd try to put it in clear perspective, give them reputable websites and tell them to go look at the pictures. Look at the before and after pictures of when people first started the drug, and what they look like six months later. The risk of HIV and hepatitis is there. I'd explain how it's going to affect their lives - forever."

Coming next week: Local law enforcement and school districts cope with the heroin crisis and its effect on crime in the county.