Dansko proves high-tech and sustainability can work together A Kiva robot follows bar codes on the floor to locate the specific product needed to fill an order.

Driving along Route 796 in southern Chester County, drivers can't help noticing the new, large industrial building sitting well off the road. The building bears the name of one of the area's most recognizable and respected businesses, Dansko.

What the average passer-by doesn't know is that something else shares the 200,000-square-foot building with the company's renowned footwear - robots. 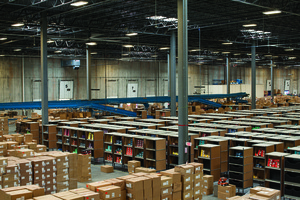 Despite the common worry that workers will be replaced by robots, these "bots," as they are referred to at Dansko, aren't taking anyone's job. In fact, since the distribution center opened in November 2012, additional employees have been added to the warehouse team, bringing the current number of Dansko employees to about 185. The distribution center team, which works one and a half shifts, is responsible for receiving all shipments of Dansko footwear that arrive at Dansko from Europe and Asia.  Once received, the shoes are packed and shipped to more than 2,500 retailers.

Chief Operating Officer Mimi Curry admitted there were definitely tense moments and bugs to be worked out when the new distribution center "went live" in November.

"We spent many nights here," she said with a grin. "Every day we were learning new things, and now we are still making subtle changes that are coming from the operators. The entire team has brought suggestions for tweaking and improving the process and the system."

Curry said planning for the new distribution center actually began about five years ago as Dansko founders, husband and wife Peter Kjellerup and Mandy Cabot, knew they were outgrowing their facility and sought a solution that would carry them for the next 10 years. By the time the new distribution center was complete, Curry was shuffling stock from the existing 80,000-square-foot warehouse, two off-site warehouses and 15 trailers. "It was very inefficient," she said.

Experts were consulted on the feasibility of expanding at their current location, but they concluded there just was not enough room. Kejellerup and Cabot were determined to build a state-of-the-art facility that not only would meet their projected needs, but would also be in keeping with Dansko's commitment to minimizing their environmental footprint. They found a piece of commercial property suited to their needs near their corporate headquarters in West Grove.

Kejellerup, passionate about the environment long before "green" became a buzzword in this country, is Dansko's eco champion.  His enthusiasm and mission to make a mark with their shoes, and not their carbon footprint, are evident throughout the company.

"To construct a building in an environmentally responsible manner may not be the easiest or cheapest way," he said. "We never considered not doing the right thing. For us, there was simply no alternative to making the best use of our natural resources and being responsible in our design, construction and material choices."

In keeping with the Gold LEED (Leadership in Energy and Environmental Design) certification Dansko received for its corporate headquarters building in 2008, they planned the distribution center project with an eye to LEED certification as well.  Daria Payne, facilities manager, explains that it is much more difficult to attain LEED certification from the U.S. Green Building Council for an industrial-type building like the distribution center simply "because of the type of space it is, primarily a warehouse."

In the corporate office, there were a lot of opportunities to include features such as modular 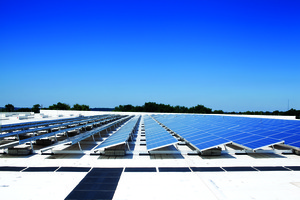 Payne is eager to submit Dansko's LEED scorecard in the class for new construction and expects to do so by the end of August.  She outlined the various categories in which an applicant can earn credits that are then totaled to determine if a building ranks as certified, silver, gold or platinum.

While Payne explained that credits in some of the categories, including brownfield development credits and credits for access to public transportation, are out of reach for the distribution center based on location and the type of building, she looks to excel in categories that are more feasible for their particular project.  For example, in the energy and atmosphere category, she expects to get good scores for optimizing energy performance and on-site renewable energy.

Both the corporate headquarters and the new distribution center utilize large solar panel systems that provide about 30 percent of Dansko's total energy needs. Their solar energy is supplemented with wind energy credits, making 100 percent of the energy used at Dansko renewable. The extensive stormwater management system at the distribution center, as well as the natural light provided by skylights, should result in maximum LEED credits as well.

"We've also reused materials where we could, like office furniture and some of the racking system," Payne said.

While Payne worked diligently on the building structure, Curry's job was to create effective packing and shipping processes for the distribution center.  Well before the construction of the distribution center began, Curry and Kjellerup explored systems that could increase the efficiency. Obviously, the time to put such a system in place would be while the initial construction was taking place.

One company, Kiva Systems, stood out as a leader in field of warehouse automation. Kiva designs order fulfillment systems that use mobile robots. Their clients include diapers.com, Staples, Walgreens, Crate and Barrel, and Gap. Shortly after the completion of Dansko's system, Amazon.com acquired Kiva.

"We lucked out in our timing," said Curry, explaining that Amazon would not permit Kiva to take on any new jobs until their own warehouses were equipped with Kiva systems.

In Dansko's case, Kiva installed 46 robots that are directed by operators as to what items they need to fill an order. Communicating wirelessly with operators using order-processing software, the "bots," equipped with onboard cameras, follow bar codes on the floor to locate and retrieve one of the 970 pods in the system containing the specific product needed for an order.

The Kiva system allows an operator to work on six orders at a time. "Previously, the pullers had to go and get the shoes; now the shoes come to them," Curry said. She explained that, on average, a worker who pulled product for orders would walk six to eight miles a day in the process.

Curry elaborated on the impact of the Kiva system at Dansko.

"We have a woman who has worked here over 10 years. She was very opposed to the new system, basically fearing change," she said. "A couple of months into it, I asked her how she was doing and what she thought of the system. She smiled and told me that she now has more energy after work to have fun, go out with friends, and to play with her grandchildren -- something she previously found difficult after walking all day."

Having worked at Dansko for 16 years, Curry knows the importance of keeping employees healthy and content. Through its foundation, Dansko encourages employees to give back to their communities and passions by providing paid time off for up to 20 hours of volunteer time.  Recently, an Employee Stock Ownership Plan, replacing one that provided partial ownership to employees since 2003, was implemented, making Dansko a 100 percent employee-owned company.