The Avon Grove 12-U Little League softball team won the first state championship in the league's history last week by defeating Warrington Little League, 5-3 in the title game that was hosted by Stroudsburg Little League in the Poconos.

Avon Grove compiled a 10-1 record during post-season play to win the championship. The history-making squad left on July 18 to play in the 2013 Eastern Regionals, which are now taking place in Bristol, Conn. Avon Grove is competing against 11 other state championship teams to determine the representative from the East Regionals in the World Series.

“Winning the state title was a great accomplishment for the girls,” said Jim Butler, the team's head coach. “This group has had a lot of success on the softball diamond the last couple of years, competing at the State Championship each of the last two years only to come up a little short. You could tell by the look in the girls' eyes that they were not going to be denied a third time.”

Katie Lengel, who is a catcher and shortstop on the team, said that everyone had high expectations heading into this season.

“I knew that there was a lot of talent on this team,” Lengel explained. “We've all known each other and played together on travel teams.”

This squad is comprised of all-stars from Avon Grove's regular season softball teams and is competing against similar all-star teams.

“In every game it's a team effort,” said Dan VanSciver, one of the coaches on the team and a proud parent of one of the players. 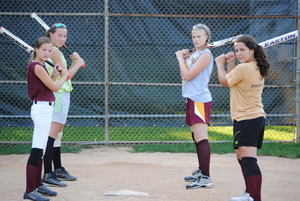 “The girls play so well together and are very supportive of each other,” said Butler. “It seems that a different player steps up and does something big for us every game.”

“We work hard at practice,” she explained. “The pitchers all pitch at home and take lessons and work very hard. Our defense is probably one of the best in Pennsylvania.”

Avon Grove is in the enviable position of not having to rely on just one standout starting pitcher to keep them in games. Instead, there are four dependable pitchers who take the mound on a rotating basis.

“We have four good pitchers and on any given day any one of them can get the job done,” said VanSciver, noting that Avon Grove surrendered the least amount of runs during the state championship tournament.

His daughter, Mackenzie, is one of the pitchers. She said that the team benefits from having four pitchers who are all different from each other because the differing styles can keep opposing teams off-balance.

Mackenzie said that, as a pitcher, it really helps knowing that the team will play good defense behind her.

Another strong point of the team is experience. Darren Laterza, a parent of a team member, explained that “all the girls have been in states in some combination or another. This is something that they've been working toward.”

He added that the team members all get along well and take everything in stride.

“I don't know if they grasp what they've accomplished—there are 240 or so teams in the state and they are the top team,” Laterza said.

Winning is nothing new to these girls, many of whom played on Avon Grove 10u, 11u, and 12u tournament teams that were very successful.

“The team consists of twelve young ladies who are not only outstanding students in school, but also very competitive athletes,” said VanSciver. “Many of the players plyed this past year on the Fred S. Engle seventh grade softball team that went undefeated in the Ches-Mont league. All the girls are multiple-sport players in school, league, and local travel teams.”

Rick Rineer, also a parent, said that the way the group of all-stars came together for the playoff tournaments illustrates what a good team it is. 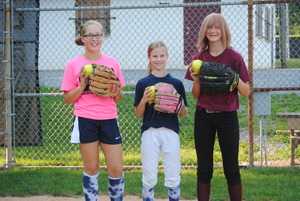 “The key to the team is the teamwork,” he said. “A lot of the girls have grown up together. The coaches are very invested in this. They've been coaches for four or five years. They've also done a great job of including all the girls in the games.”

Rineer also said that the team doesn't lose its composure. In the game against Punxsutawney, for instance, Avon Grove was facing a very good pitcher and hits were hard to come by early on.

“They were making outs,” Rineer said, “but they didn't let it get them down.”

Camryn Laterza, an outfielder and a pitcher on the team, said that the team is determined and resilient, and has the confidence to succeed.

“We definitely don't get down on ourselves,” she said. “We pick each other up.”

For Laterza, one of the most memorable games during the playoff run was the loss to Exton because that team is always so good and losing 5-4 showed how close Avon Grove was to the top teams. Now, the team has its sights set on the World Series.

VanSciver added that the team has built a reputation for good sportsmanship and coaches and officials from other little leagues have commended them for doing so.

“We play the right way and we hear that a lot,” VanSciver said. “We get a lot of compliments about how we play the game.”

One illustration of the Avon Grove team's character occurred in the early part of the Eastern Regionals. A New Hampshire Little League team was competing in the tournament for the first time ever and was losing its first game by a wide margin. The Avon Grove players, who were watching the team from the stands, started cheering on the New Hampshire squad, encouraging others to join along. The cheering lifted the New Hampshire team's spirits at a time when they needed the boost.

Butler said that his team is appreciative of the chance to represent Pennsylvania in the Eastern Regionals.

“Going into regional play, the girls are confident, but they also appreciate where they are and are very thankful for the opportunity to not only represent the Avon Grove area, but also the state of Pennsylvania as well,” Butler said.

Winning the state championship will certainly be a memorable achievement for all the members of the team, but Lengel said that the most important part of the experience might be the fun and friendship that goes along with the winning.

“I think our team is very good,” she said, “but it's also just fun to be together. What's better than spending the summer playing the sport that you love with your friends?”