The hosts of episode three find out about Jimmy John's from owner Roger Steward (left).

The eight-minute episode of "American Detours" follows host Jael de Pardo and Andy Trought, from American Collectors Insurance, driving around Chester County in a gleaming 1968 Shelby Cobra that's part of the collection of Tim McGrory, who is interviewed among several of his classic cars.

The show combines dazzling cars with interesting drives, so along with thecloseups of the Shelby's vibrating motor, viewers can get a glimpse of some places they might not know about. Earlier episodes of "American Detours" visited southwest Louisiana.

The episode looks like it was shot last fall, with autumn scenery showing Chester County in its best light. The visit to Longwood has shots of the lily pond and a stroll through the Conservatory with communications manager Patricia Evans, who gives a little background on the historic site. The hosts get to park the Shelby right next to the Conservatory in a spot that's definitely off-limits to regular visitors.

The hosts then visit Jimmy John's, the hot-dog stand turned local institution that's on Route 202, just north of the intersection with Route 1 in Chadds Ford. Owner Roger Steward talks about the history of the eatery and there's footage of the model trains in action inside the restaurant, along with some grilling hot dogs that will definitely make you hungry.

"You learn a lot behind the wheel along these epic roads, from amazing stories about the cars and their owners to fascinating tales of the route and the people who call it home," said American Collectors CEO, Jill Bookman in a press release about the new episode.

The show is online at http://americandetourstv.com/episode-3.php. 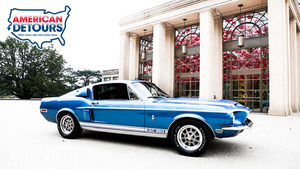